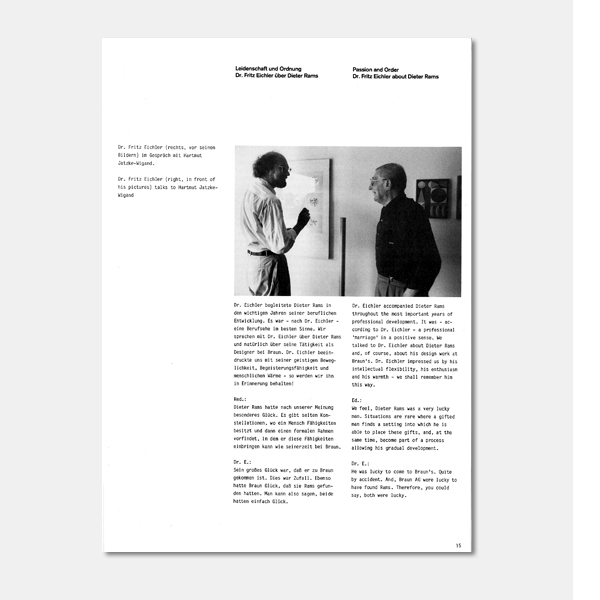 H. Jatzke-Wigand: We feel, Dieter Rams was a very lucky man. Situations are rare where a gifted man finds a setting into which he is able to place these gifts, and, at the same time, become part of a process allowing his gradual development.

Dr. E.: He was lucky to come to Braun's. Quite by accident. And, Braun were lucky to have found Rams. Therefore, you could say, both were lucky.

Ed.: We know Dieter Rams as a very competent person. We do not know Gugelot. However, we understand that he always emphazised the clear line of his design work. Do you think this friction proved fruitful for the company? Aicher, Gugelot, Rams, Eichler, the Braun brothers, all expressed their individual positions, how did they get on together?

Dr. E.: No, there were no fights - on the contrary. There was consense, not dissent. Like Müller and Wiegand, head of the construction department, Rams graduated from Wiesbaden Art College. I gave Dieter Rams a picture for his 50th birthday. It was not a particularly good picture - but it suited him very well. Behind a screen there was red and other colours meaning: passion. Passion and order, these two components make up Dieter Rams. It is true, Rams is passionate to this very day. He may get excited, but he concentrates on facts.

Ed.: Let's go back to the beginning. Rams graduated from Art College and worked for an architect for a short while. He became acquainted to Gugelot and his colleagues from the HfG Ulm through Braun.

Dr. E.: Of course, he was prepared to absorb the philosophy. He had been working for Appel and Becker. An American architect company who used methods that were much more modern than common at the time, but on our line. He joined us as an interior architect.

Ed.: He designed a room for you?

Dr. E.: I may still be able to draw the groundplan which was bare and matter-of-fact. The guest room at Braun's was turned into my office; a bathroom next door, which I frequently liked to use. In times of increasing hectic, I locked myself in during office hours and sat in the bath tub, after having tidied up my desk. When I returned I was a different man. I am really very grateful to Erwin Braun, to both Braun brothers in fact, for granting me such freedom.

Ed.: Otherwise, you probably would not have been able to work so effectively.

Dr. E.: They surely recognized me for what I was. It was the only way to get me to work.

Ed.: How did you find out that Dieter Rams was the right candidate?

Dr. E.: A room had to be furnished. A number of interior architects worked on the task. The room measured about 20 square meters, which is not very !arge.

Ed .: What did the designs look like? What was so special about Rams' design?

Dr. E.: All others turned the room into a magnificent office the size of a hall, very seductive drawings. Rams included a table, four chairs - there was no need to draw a desk, since I have never used one in my life - a window sill and a couch. When I looked at the drawings together with Hans Gugelot and Erwin Braun, Gugelot said, he is the only one worth considering.

Ed.: Do you remember moments, when - looking at his later design work - you said, what a piece of luck that we decided to employ Rams!

Dr. E.: I said that frequently. If you work together you have an eye on a person's development. Originally, Rams was not a designer; he became one. At Braun's. He worked on radio sets.Then came the SK 4, Snow White's Coffin. As far as I can see, the main contribution came from Gugelot, since the original idea, its character, were Gugelot's achievement. Neither myself nor Dieter Rams would have had the idea to use a metal sheet housing. When Gugelot came up with it, all technicians were opposed to it. But Artur Braun said, that's it, we'll do it.

Ed.: Which of Dieter Rams' designs would you consider most successful?

Dr. E.: The world receiver is a very successful radio set, an early top receiver. However, I knew a second design version which I would have prefered. Mr. Buresch, head of the technical development department, voted for the design which then went into production. The loudspeakers of the second version were asymmetrically placed an top of the receiver.

Ed.: Do you think there is a common element in Japanese garden structure and Braun design?

Dr. E.: Yes. I think, there is a relationship. All Braun designers feel related to each other: Rams, Gugelot, Hirche, etc.. Related in the sensitivity for harmony, order, etc.. Up to a philosophical point of view - Japanese gardens are based on the same laws. I remember a garden in a monastry, designed for meditation. There were only a few stones. lt was magnificant. I wish I knew how to capture the spiritual substance of objects and - for example transmit it to my pictures.

Ed.: Was it possible for Braun designers in the early 60ies to say we plan to design a certain device, it should look like this, and we want it to have these specific technical details.

Dr. E.: Of course. Everybody at Braun's was free to produce his ideas and say, couldn't we do it this way? On the contrary, to this very day, constructive technical ideas have been coming from designers. Dieter Rams is a constructive person.

Ed.: So Dieter Rams made proposals for the sets, while at the same time producing technical specifications for them? Was this how he developed e.g. the TP 1 transistor phono combination?

Dr. E.: That' s what he did. lt was a design idea. Technicians helped to create the final product.

Ed.: Could you be a bit more specific?

Dr. E.: We had this complex system way of thinking, an impulse from Ulm which directly influenced our work. The individual parts were fitted on a metal sheet. A well-known musician, whose name I am not able to recall at the moment, composed the music for the wake-up record. The music was recorded, its tempo gradually increasing, then became more soothing after a while. High quality music, no jazz which would have been better suited. The record was to be switched on automatically by means of an alarm clock connected to the record player.

Ed.: This system way of thinking originated from the HfG Ulm and was introduced by Gugelot. It may be traced in all of Dieter Rams' work, undergoing further development at Braun's. Would you say these special designs may well be considered fateful?

Dr. E.: One does not consider them fateful. One cannot tell how they come to exist. Neither can Dieter Rams. In the process of drawing it's suddenly there. Sometimes it takes five minutes. Fateful minutes.

Ed.: That's a good title for a book: Dieter Ram's fateful minutes. His drawings look as if made in haste, the basis for the technician to built a three dimensional model afterwards. He needs to understand Dieter Ram's way of thinking.

Dr. E.: I think, in the beginning Dieter Rams himself worked in the technical department. Later, of course, the designs were transformed by others. Rams improved the models. When developing a product, the constant dialogue with the technicians is vital.

Ed.: How did Dieter Rams cooperate with the technicians?

Dr. E.: Their cooperation has always been good. He is a realistic and cooperative person!

The interview was conducted by Hartmut Jatzke-Wigand und Jo Klatt on July 3, 1991 in Dr. Eichler's apartment in Bad Soden.