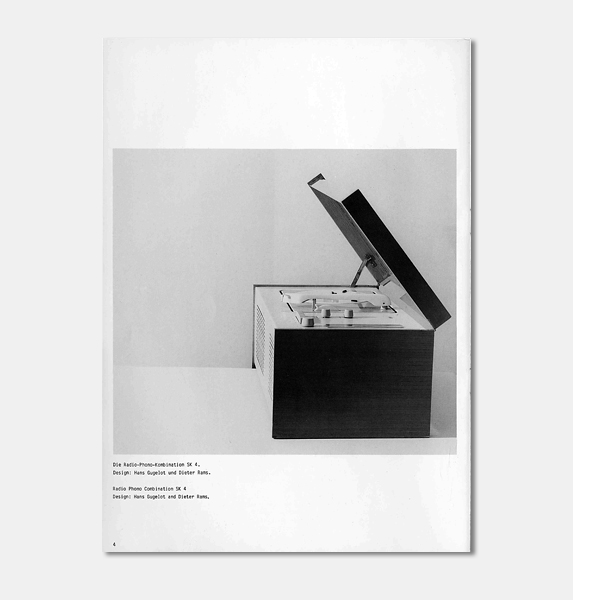 
In his obituary an Hans Gugelot in 1965 Dr. Fritz Eichler, the first product design director, wrote about the SK 4 design history.

'I can remember when the SK 4 was born – the unit that probably did more to distinguish Braundesign than any other product. lt was no easy thing. Rams and I barred each other's way. We had agreed an the arrangement of the record player and the dials. They had the same appearance as today. But we could not solve the problem an the essential part – the housing. We worked an a wooden housing in diverse variations. We just could not get anywhere. I visited you in Ulm. You had a melancholic expression an your face and you promised to think about it.

A few days later, you presented the finished model; a white u-form metal housing between two wooden sides – such an obvious, simple solution that could make anyone envious. In the past, noone had ever dared to make a housing out of metal. The engineers moaned – but they recognized the necessity. Lateran, the transparent lid was added. Snow White was born.'

'... in his self ironic manner he still described the G 11, PK-G and FS-G radio sets which he designed for Braun as 'soundfurniture'. This – at least for a man from Ulm – could mean the warst: the bourgeoise preference to hide technical devices in living room furniture.

When designing the SK 4 radio set, Gugelot was sure to have made his convincing step: His constructive idea: two vertical wooden sides, a metal sheet spanned between them. Ever since the M 125 furniture system and the early wooden radios this constructive idea has become an 'idee fixe' throughout his drafts: a kind of visual dramatisation of bearing and nonbearing functions. Typical again: the horizontal loudspeaker slits located in the same manner as the PK-G of 1955.

In his opinion, the metal sheet housing served to overcome the radio's furniture appearances; at the same time he found a favourable construction for a standard device for people of little means. An old dream. The head of the metal workshop, Josef Schlecker, remembers today, how difficult it was tobend a metal sheet of that size to a precise radius in a badly equipped workshop. 'Paul Hildinger built the wooden side panels. I was allowed to try the white colour and the sparse graphics on the operating panel and the scale. Too little to count as fellowcreator.'

Now, what about the acrylic glass lid? Dieter Rams: 'Hans Gugelot developed the device with this ingenius solution. Two wooden side panels and the metal housing to hold the chassis. Viewed from above, the metal housing goes on to become the lid.

We at Braun did not like this lid very much. lt looked rather like a bread box. For this reason several sets were produced without a lid; they were then photographed for the brochure. But only the series with the transparent lid became a success, as in the meantime we hit on the 'Snow White' idea. Thus the lid became transparent. This influences the entire phono industry.'

Technically, the SK 4 was a novelty. lt was not fitted with the typical u-shaped metal chassis but with a specially cut housing. The location of switches and push-buttons followed the predetermined arrangement. lt derived from functional and aesthetic reflections, an operating panel appeared on the upper righthand side. In a similar form this had been realized with the Braun Super 6740 W in the 30ies.

All major radio manufacturers did not give Braun's new form a chance; they were of the opinion that there was no market for such an avantgarde device.

Despite these expressions, famous architects and interior designers used Braun radio sets, especially the SK 4, in their displayed livingrooms at the Berlin Interbau 1958/59. Thus the Interbau helped to establish Braun's new line with the retail business and the public.

Like all well designed products such as the SK 4 all visible parts, e. g. even such simple things as hinges for the transparent lid, buttons and knobs, were not bought from an external accessories' manufacturer; they were especially developed and made according to the designers' ideas.

Braun therefore worked on further developments for a modern record p!ayer chassis for the SK 4 and other phono sets. This metal technical demands at the time as well as answering all design ideas of a new form. lt is interesting to remark that Braun had been one of the largest manufacturers of phono chassis before tlie war.

Obviously, Braun recognized an importance in this developement, especially with the PC 3 record player, as a number of designers worked on it. Prof. Pfänder remembers: 'I was Chief of Office with Wilhelm Wagenfeld at that time, today we call it chief designer. We were commissioned by Braun to develop a record player chassis for the SK 4. Ralph Michel, a moulder, worked on the tonearm. I drew up the three-point base for the turntable which proved unfavourable in use. That's why we recommended a fivepoint base for the turntable. The tonearm was a modified version taken from the portable record player 'Combi'. This as well as the turntable's trident was carried out by Ralph Michel, of course, under the supervision of Wilhelm Wagenfeld.'

Dieter Rams and Gerd A. Müller worked on the development as well.

The radiophonq combination SK 4 received widespread national and international recognition by experts, but also from the public in terms of sales figures. Especially this aspect was important during the initial phase of the company, for several sceptical Braun managers as weil as for the retail business.

Thanks to Braun's design 'adventure' and the 1955/1958 success, functionally well designed devices are offered on a !arge scale. Now, there is no longer a any commercial risk, the public demand them.

So Braun has set a very successful example! Thus can be said: No other company has developed and built the new humane functional design as convincingly and consequently as Braun.

Maybe we should thank both brothers Erwin and Artur Braun, those daring and anticipating initiators.

The famous SK 4 was introduced in 1956; its technology comes from the SK 2 but with a different chassis which harmonized with the new design. Following the SK 4 was the SK 4/1 which showed slight technical changes and later the SK 4/2 with separate high and low control. The turntable had five rubber nubs instead of nubs instead of three. The price for this unit: DM 295,--.

In the course of further developments the following sets were put on the market which maintained their typical SK 4 appearance:

SK 5 C. The export version of the SK 5 for Canada and the USA. Instead of long wave it had a short wave range, distended VHF range as weil as a power pack for 110 V/ 60 Hz. SK 6 1960. Built with the new record player PC 4 with stereophonic playback of records. The sound-arm had a stricter form and the turntable had a rubber ring instead of rubber nubs. lt cost DM 448,--.

SK 61 C 1961. This export version of the SK 61 for Canada and the USA has instead of the long wave range a short wave range and a distended VHF range as weil as a power pack for 115 V/60 Hz.

SK 55 1963. The last set of the SK 4 type. lt was the monophonic counterpart to the stereo phono super SK 61. The set had the record p!ayer chassis P2 with a light soundarm of alutubes and a turntable with a !arge rubber disc in charcoalgrey. The control buttons were also held in charcoalgrey, only the transmitting button was white with a red dot. Another change concerned the subdivision of the loudspeaker slitds at the front side. The wooden sides were no langer produced in elm but in ash. The price was DM 438,--.

Instead of 'the grand years of international awards' only a few will be mentioned: International Bauausstellung, Interbau Berlin, 'Gran Premio' for the entire programme on the 1957 triannual exhibit ion, Milan, and the acceptance to the continuous collection of the Museum of Modern Art, New York, in 1958.

A set out of the SK 4 to SK 55 series is a must in every collection. Most important is the SK 4. Its timeless design reminds of the initial 'to leave out' idea. The SK 4 is considered the Brauntypical radio set of the 50ies and 60ies. This led to an overevaluation. Wellkept sets may be obtained at prices of DM 150.-- to DM 250. We like to thank C. C. Cobarg and H. Lindinger who have supported us with informations in the elaboration of this article. Remarks on the History of Technology: In the summer of 1939 Max Braun came up with the Phono Super 6740 W. In the international magazine 11/1986 it was described as follows: 'lt was a world premier for a radio set with record player and operation (scale, knobs) under one lid.' The picture makes it clear. Because of the beginning of the Second World War in September 1939 only few pieces could be produced. They are a rarity. When the SK 4 was designed, the Phono Super was neither known to Hans Gugelot nor Dieter Rams. There was no 6740 W in the badly damaged archives. Brochures turned up very much later.