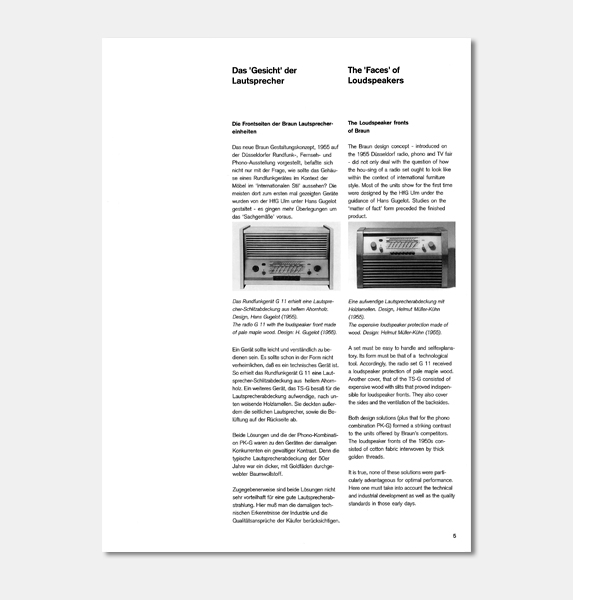 
The Braun design concept – introduced on the 1955 Düsseldorf radio, phono and TV fair – did not only deal with the question of how the housing of a radio set ought to look like within the context of international furniture style. Most of the units show for the first time were designed by the HfG Ulm under the guidance of Hans Gugelot. Studies on the 'matter of fad' form preceded the finished product.

A set must be easy to handle and self-explanatory. lts form must be that of a technological tool. Accordingly, the radio set G 11 received a loudspeaker protection of pale maple wood. Another cover, that of the TS-G consisted of expensive wood with slits that proved indispensible for loudspeaker fronts. They also cover the sides and the ventilation of the backsides.

Both design solutions (plus that for the phono combination PK-G) formed a striking contrast to the units offered by Braun's competitors. The loudspeaker fronts of the 1950s consisted of cotton fabric interwoven by thick golden threads.

lt is true, none of these solutions were particularly advantageous for optimal performance. Here one must take into account the technical and industrial development as well as the quality standards in those early days.

The 'slit-fronts' were also found in Braun's first non-integrated loudspeakers. The L 1 (1957) was the first in this series, suitably used together with the radio phono combination atelier 1, later with a stereo set. The protection of the 'Snow White's Coffin' (SK 4, 1956) consisted of horizontal slits. Only few Braun music cabinets and radios were equipped with cotton loudspeaker fronts whose design were a direct reaction of the market demands.

Before the successful fabric made of aluminium metal sheets was used in the making of front protections for Braun loudspeakers the company used black perforated sheets for the small L 01 (1958) and the electro-static loudspeaker LE 1 (1958). These covers were modified in 1972/73 for the loudspeakers L 260 and L 308 which were made of plastic.

The most important loudspeakers were the L 40, L 20, L 50, L 60 and the slim L 45/46 (1961-64) which were the first to be fitted with the well-known aluminium fabric. A special surface treatment gave the perforated sheets a clear and transparent appearance. The term 'Taunussound' was soon found to describe this phenomenon.

In the late 1960s and in the early 1970s new loudspeaker units were built of a significantly stronger radius and new fronts made of perforated eloxied aluminium sheets like in the L 710 and L 810. These loudspeakers were special suited for Braun hifi units as for instance the studio 1000, 500 and 250 and the control units of that period.

Another considerable 'change of face' could be found in the Braun loudspeaker series L 830, L 630 and L 530 with their passepartout-like and slightly protruding front of perforated metal sheet. Another modification were the L 200 and output compact with uncommonly bulging appearance.

In the early 1980s Braun built a variety of loudspeakers for a number of different purposes. Almost all of them received a protruding perforated steel front. The SM 2150 must be considered the essence of design. These were the first loudspeaker units that received the form of a column with two high, two medium and two bass channels, all with the characteristic metal fronts. The column shape was later imitated by other manufacturers.

The perforated metal sheets were the only material used for loudspeaker front in the M 9 of 1990. However, small alterations were made now and then. The LS loudspeakers (1982) came with front sides that were suitable for combination with the atelier series.

A special series of loudspeakers were the Braun Bel car loudspeakers (1982), some of them with round forms and protruding grid fabric, at that time a completely new solution, again often imitated by competing firms.

The loudspeaker fronts – not all models were mentioned in this article - were also called 'the faces', carefully designed, reflecting the ideas that also went into the designing of control units.

Technical data and quality standards must be seen in the context of the different production periods. Compared to today's high capacity and improved technical standards the early Braun loudspeakers and their amplifiers certainly would not stand a chance.

However, there are fans who would gladly exchange Braun's last studio monitor LS 200 (300 W) with four loudspeakers for the widely coveted L 1000 with 13 loudspeakers (80 W). I must say, I have no problem to understand their motives.

Almost all the loudspeakers mentioned here can be still be repaired by selected retails and expert workshops.