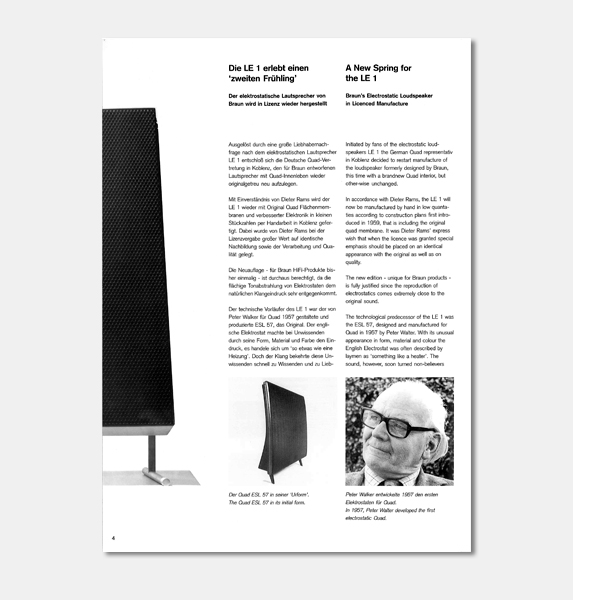 A New Spring for the LE 1

lnitiated by fans of the electrostatic loudspeakers LE 1 the German Ouad representative in Koblenz decided to restart manufacture of the loudspeaker formerly designed by Braun, this time with a brand new Ouad interior, but otherwise unchanged.

In accordance with Dieter Rams, the LE 1 will now be manufactured by hand in low quantities according to construction plans first introduced in 1959, that is including the original quad membrane. lt was Dieter Rams' express wish that when the licence was granted special emphasis should be placed on an identical appearance with the original as well as on quality. The new edition – unique for Braun products – is fully justified since the reproduction of electrostatics comes extremely close to the original sound.

The technological predecessor of the LE 1 was the ESL 57, designed and manufactured for Ouad in 1957 by Peter Walter. With its unusual appearance in form, material and color the English Electrostat was often described by laymen as 'something like a heater'. The sound, however, soon turned non-believers into faithful followers and fans of this loudspeaker technology and that is why it has remained unreservedly unchanged to this very day. Many newly developed loudspeakers could barely come up with similarly good results in comparative sound tests. Which is very important for use in commercial studios.

The next model, the ESL 63, was introduced in 1981 with an enlarged 'listening space' for even better reproduction results, especially when it came to optimal quality for a larger group of domestic listeners. The good results were once again achieved by Peter Walter who was head of the Ouad development department from 1963 to 1981.

The music production company Tritonus, Stuttgart, wrote in a letter to the editor: "Most remarkable in these eletrostatic systems is that they are faithful to impulse reproduction, they knock you out with their brilliant sound and pleasant lack of boom and 'tizz' sounds. The precise reproduction of instruments and sounds ensures a perfect sound balance. Another point of praise is that you could work with these loudspeakers for hours on end, especially in digital cutting. In this respect we prefer to use additional Gradient subwoofers for the better balancing of the bass lines."

By the end of the 1950s Braun were pleased to note the clear transparency in the reproduction quality of the ELS 57. This led to the decision to develop this kind of loudspeaker especially for the studio 2 hifi system, then under construction. The amplifiers were equipped with additional mains outlets, required for the operation of electrostatic systems.

Dieter Rams wrote about the LE 1 in his book 'Less but better': "Braun's electrostatic loudspeakers LE 1 (1960) were fitted with large, very light membranes covering the whole front. Reproduction quality was impressively clear and transparent, according to the music that was appreciated at the time: jazz, music by Bach etc."

Without a doubt, Braun did not want the design to appear like the 'backrest of grandma's sofa'. Of course it was to be developed according to the newly created clear, strict design philosophy that was already noticed in other Braun products of the time. The existing technology was incorporated into a rectangular housing that was mounted on two thin metal legs thereby determining the tilt sound. Three high and two bass tone, the transformer elements plus the electronics for the high-voltage switch were excellently placed behind a slightly protruding dark grey perforated front. In spite of its large housing size the loudspeaker appeared delicate because of the black and grey colors and a skillful assembly. At that time Braun produced no more than 500 pairs of LE 1 loudspeaker.

The uncommon form and the high price kept many hifi fans from buying the product. Although not many pieces of the overall quantity had been sold some of these turn up now and then, in a more or less well preserved state. And most of the time the seller has only vague ideas what price to ask.

Technically seen used electrostatics can still be repaired by use of the original supplied by Ouad. A new protection switch can be installed to prevent over-charging. The 'Ouad Musikwiedergabe GmbH' in Koblenz have specialized in such repairs for some time. Now that an increasing demand for well-preserved Braun LE 1 has been noted it was decided to restart the production. Therefor the people in Koblenz have asked Dieter Rams for a new licence that has readily been granted.

lt can easily be imagined that low manufacturing quantities aim at fans of this particular technology and design enthusiasts alike. lt makes sense that only individual hand-made pieces will be produced. Mass manufacture is not intended. Therefor the price seems justified.

The new edition is identical to the original of 1960 with the exception of the logo and the hint that the loudspeaker has been manufactured in licence granted by Dieter Rams. Price per piece DM 3.490,--.