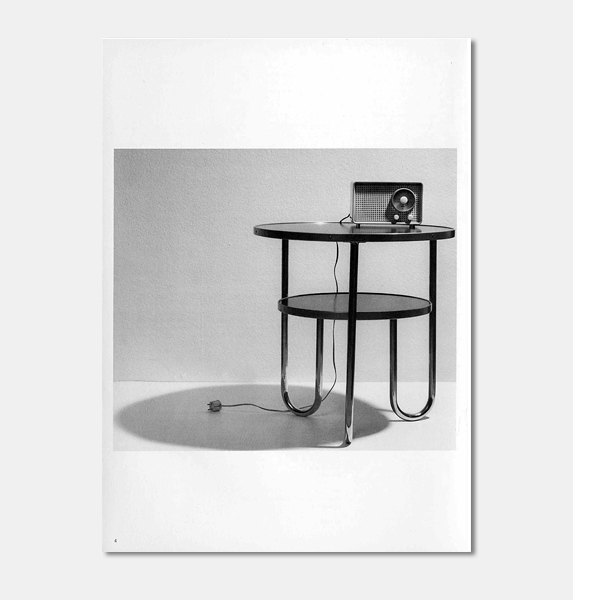 
In general, the Phonosuper SK 4 (Snow White's Coffin) is regarded as Braun' s start in post-war design development. However, the first newly designed radios are the Kleinsuper SK 1 and SK 2, the music cabinet series PK-G, the Tischsuper TS-G and G 11 as well as the portable radio combi, which were introduced on the 1955 Düsseldorf Funkausstellung. These sets were considered revolutionary, with them Braun 'shocked' the industry.

Both SK 1 and SK 2 were among the first visible result of Braun's new strategy from 1954/55 onwards. The letters SK mean 'Super Klein' (super small).

This development was influenced by a market study on behalf of Messrs. Max Braun, Frankfurt, stating the following results:

"The 'uniform' casing is not enough. Even the most experienced retailers were unable to distinguish the most recent 'uniform' radio set casings except by the manufacturer's logo. Although harmonizing with the mass furniture production, 30 per cent of our young educated workers want to live 'differently'. This can be seen when looking at increasing turnovers of modern furniture.

What must be done?
A radio set is a piece of furniture. Thus it is subject to the development of furniture. We have witnessed this development. The direction: modern, clear, unobtrusive form, good material, light colors, sensible construction, high technical capacities. Retailers and manufacturers have to adapt to this tendency – because in free enterprise the consumer' s wishes are the most important criteria.

What has been done?
We have decided to follow this development. Excellent designers have matched Braun models to the essential new furniture line. They deliberately renounced the original, trendy, the sensational."

In 'Braun Betriebsspiegel' of August 1955 Erwin and Artur Braun introduced the study to all Braun employees. A comprehensive brochure featuring the new radio and tv set programme had been added.

At the time when SK 1 and SK 2 were about to be developed, contacts to the HfG Ulm were already established. Yet, the Kleinsuper audioset was designed at Braun' s, designers responsible were Artur Braun and Dr. Fritz Eichler.

The radio set was bakelit-made, the housing lacquered, it's metal-sheet front white and perforated. With its simple operating elements it proved a trend-setter of postwar design.

With circular scales and two knobs (without graphics) SK 1 und SK 2 were a pleasant contrast to competitive products. The radii of both operating elements and housing formed a well-proportioned unit. Otl Aicher' s (from HfG Ulm) design principles influenced the style of the scale graphics. With its formal distinction, its small size and pale colors the SK 1 and the SK 2 harmonized with every stylistic environment.

"A typical contemporary counterpart to both the SK 1 and SK 2 is Philips 'Philetta', the most successful small radio set of that time. The set metall design requirements valid at that time, opposed by the matter-of-fact, reduced SK 1/2. A unit without adornments, without false decoration. With smooth surfaces and well-balanced proportions functionally designed.

The SK 1 and SK 2 became well-loved radio sets, produced between 1955 and 1964 in large quantities and different types; initially in non-typical Braun colors: light grey, light green and beige, later tobe reduced to graphit and light grey. The SK 1 and the SK 2 were awarded the 'Grand Prix' at the 1957 XI. Milan Triennale.

30 years later quite a number of sets can be found in German households, mostly set up in kitchens and workshops. Placed in their environment they look as if they were contemporary products.

SK 1 or SK 2 (like Snow White's Coffin) are a must in every collection. The most attractive pieces are SK 2/2 and SK 25 bearing the small Braun logo. Colors: graphit and light grey. Well-kept units can still be obtained at reasonable prices of up to DM 200,-- .

The sets appearance can only be distinguished by color and by the shape of the scale. Essential features are:

Station indication by means of a red point on the scale, this bearing a large Braun logo and lacquered half-way up. Both knobs unmarked. Left: On/Off/ Volume; right: tone.

Selection scale and design like SK 1, however with additional graphics for the medium wave band. Left-hand knob: On/Off/Volume; right-hand knob for FM/WM with additional space. The tone adjustment is positioned at the rear.

Selection scale as SK 1, with red point, this bearing a small Braun logo, lacquered half-way up. Underneath the Braun logo a small lamp for the operating indicators (called SK 2 b in the circuit diagram).

Station selection by scale indicator with red line, driven by a small warm gear. The scale is white and bears a small Braun logo. Underneath the Braun logo a small illuminated point can be seen, serving as operating indicator. Rear made of plastic.