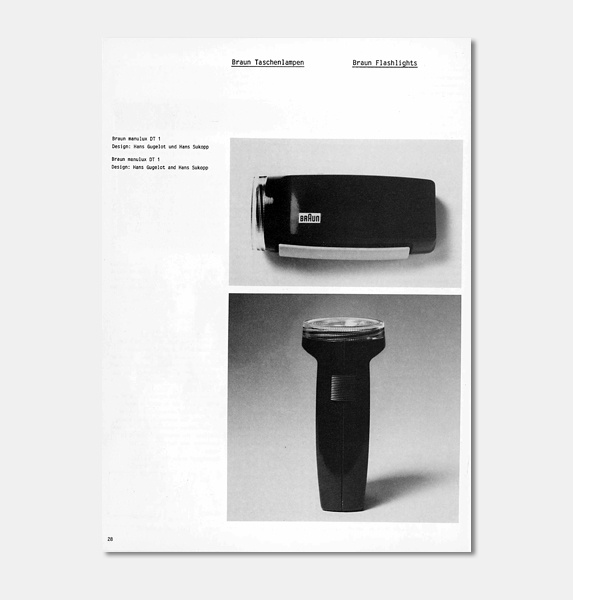 
An interesting production line in the Braun item range are the flashlights. In 1938, the dynamo-operated hand-torch 'Manulux' was produced. lt was manufactured during the war in large quantities and was the ideal lamp in a time of emergency lighting, power cuts and black-outs –independent of circuit connection and batteries. 'Manulux' was a faithful companion for many Germans on dark streets and on their way to the bomb shelters. This robust torch in its dark brown Bakelit casing was the first item that Braun reproduced after the war in 1945.

25 years after the start of production of the first Braun flashlight a new brand of high formal quality was created. Supported by Hans Sukopp, Hans Gugelot developed the dynamo-operated flashlight 'DT 1' with manual operation and autocar contact in 1963.

The body is easy to handle, has a big reflector, 50 mm in diameter, and contains an eight-pole high capacity dynamo. Accessories were exchangeable filters in various colors and a lang connection cable with a special plug for the cigarette lighter in the car. The casing is made of dark olive plastic, the aluminium bow for the drive is sinkable and lockable.

The 'DT 1' is one of the most beautiful Braun products of the sixties which, to this day, meets modern high formal demands. Regrettably, after many years of storage the new 'Manulux' will not function very well because, due to different tension and shrinking properties, the plastic cogwheel loosens from the body, tears and breaks off.

The price at that time of DM 29.-- was high for a torch. As a classic 'Gugelot Product' the 'DT 1' has become a much-wanted rarity.

Another torch designed by Hans Gugelot before 1965 and further developed by Braun is the Braun 'diskus'. Two primary cells of 1,5 volt supply the energy (Lady cells).

There were two variations, each in black, blue, green, orange and yellow. The diameter of the very handy torch is 70 mm. The differences in both series are few. The first version is fitted with a vacuum steamed plastic reflector, the front-glass fitted from the outside. The second version has an aluminium reflector and the somewhat smaller front-glass is fitted from the inside. Two holes on the rear side have been drilled to attach a colored string in order to carry the torch around the neck.

The 'diskus' was priced at DM 8.--; both batteries cost approx. DM 3. -- each. Of this beautiful torch well over half a million pieces were produced. Where have they gone?

This new interior has been so well-protected by patents that other flashlight manufacturers were prevented from copying the 'diskus' lamp. In 1970, the flashlight 'manulux NC' was put on the market together with 'diskus'. All details were typically Braun and have been consequently styled. Designer was Dieter Rams.

Die rechargeable NC-accumulators have been laid out for AC of 90 to 250 volts. Maximal operating time is 60 minutes. In many cases the accus have still been working after 15 years.

On illustrations the Braun lettering can be seen horizontally as well as vertically. Apart from that there are no other differences within the series. The price for the black 'manulux NC' was DM 22.--.

Each Braun flashlight is operated by different sources of power supply (dynamo, accus, batteries). Amongst others, this results in their various forms. Each lamp is proof of the revaluation of small household goods through exemplary design.