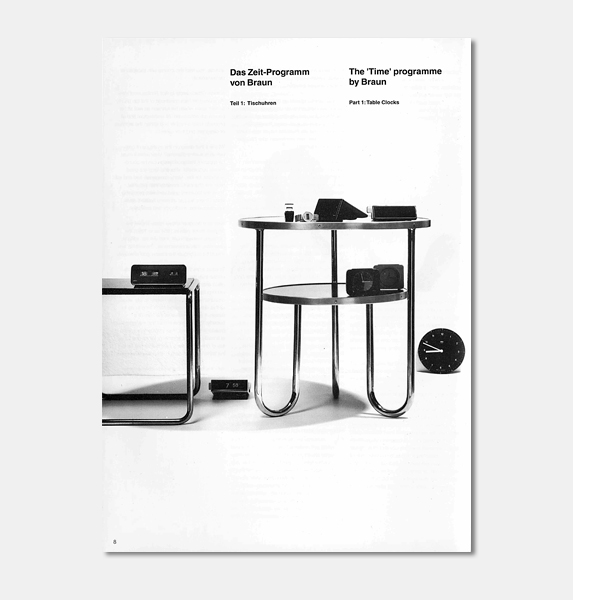 The 'Time' programme by Braun


In 1971, when Braun started their 'time' programmme by introducing the clock phase 1 there were only few manufacturers of wall and table clocks who produced outstanding design. Apart from Junghans who had cooperated with Max Bill, there were above all the Italian companies as for instance Artimede, Lorenz, Ritztolara and Solari. Their design clocks were available from rarely any other than exclusive interior retailers and shops specializing in clocks.

This presented Braun and their well-balanced programme (segmented into alarm clocks meant for living quarters and offices) with the chance to procure new customers via new distributors such as electronic dealers and department stores.

According to the following manifest Braun have been responsible for a convincing clock programme for more than two decades:

1. Braun clocks have clear distinct features whose sole purpose is to give precise information about the time.

2. Braun clocks have renounced all unnecessary decor and superfluous gimmicks; they are easy to handle.

3. Braun clocks are remarkable because of their consequent, functional design and modern technology.

Evidence for Braun design quality can be seen in the fact that a number of models have been admitted to the Museum of Modern Art collection in New York, not to speak of the countless design awards received over the years. Similar to other product segments Braun's extraordinary design helped to heighten consumer's awareness for good design and innovative technology, thus influencing a whole new market section. No wonder therefore that Braun are one of the leading manufacturers of electronic alarm clocks.

We have compiled the whole of Braun's clock programme (table, alarm and wall clocks) from 1971 to 1994 and divided them into two parts. Only the formally interesting specimen have been photographed (with a short description to go along with it). The table of currently produced clocks contains those on the market from 1990 onwards. They can be seen as a supplement to the documentation by Klatt/Staeffler 'Braun+Design Collection'.

Digital clocks with 24 hours alarm mechanism. This first model of the Braun alarm clocks range comes in a rounded casing a feature which is constantly recurring in all following models. The time and alarm indication are done by segmented rollers, i.e. for each digit one indication display field has been provided. By this not exactly space-saving technology the read-off displays on the large front are relatively small. Mains model in white, red and olive. Battery model in white, red, olive and with acryl housing.
Design: Dieter Rams, 1971.

Analog clock for mains operation with 24 hours alarm mechanism. The phase 3 resembles conventional alarm clocks because of its matter of fact design. A good solution had been found for the operating knobs positioned on the rear plate. The model was produced unchanged over a period of 14 years. lt can be regarded as a long-life classic. Main model in black and white. The white phase 3 was produced with black and white dial.
Design: Dieter Rams, 1972.

Fully electronic digital clock for mains operation. Design and material (metal housing) convey distinct high-tech character. The indication segment is slanted backwards and fitted with well readable digits. The operating knobs are positioned on the top, all adjusting elements are found at the base plate. Seen from the side the clock looks like a modern sculpture. The functional is still one of the most attractive Braun digital clocks. The futuristic design inspires enthusiasm; it makes the clock an attractive collection item. Mains model (digital DM 18) and black (digital DM 24). The black model is available with English inscription.
Design: Dietrich Lubs, 1975.

Digital clock for mains operation with variable set-up angle and adjustable alarm volume. The corpus is of extremely flat design; its inside houses a complicated endless band transport system for the time indication. Second indication and alarm setting are made via small rollers. A green spacing above the alarm set device indicates 'ready for action'. The contrasting large digits are green. Main model in white.
Design: Dietrich Lubs, 1975.

Fully electronic digital clock with 24 hours alarm mechanism. The well-proportioned form of the DN 40 with its slanting back was used as a prototype for a series of similar clocks by competitors. The green fluorescent display with its 15 mm digits is very well readable and adjusts automatically to different degrees of light All operating elements are positioned on the back. Mains model in black, white and red.
Design: Dieter Rams/Dietrich Lubs, 1976.

Analog clock with 12 hours alarm mechanism Characteristic features of the AB 21 and the follow-up model AB 22 is the large see-saw switch for the alarm positioned on top of the clock. Battery-powered version black-red and white.
Design: Dieter Rams/Dietrich Lubs, 1978.

Fully electronic digital clock for mains operation. The visotronic is an unusual table and alarm clock that fulfills high formal and technical demands. The concept shows distinct parallels to the functional. The DN 50 was included in the Museum of Modern Art Collection. The twisted L-shape as a basic form ensures comfortable read-offs and easy handling. The generously dimensioned display shows time and alarm separately. Other features are sensor key for snooze alarm, self-adjusting display color as well as optical and acoustic signals in case of power failure. The follow-up model visotronic 4 DN 54 is formally identical with additional functions. An attractive collection item. Mains model in black.
Design: Ludwig·Littmann, 1979.

Fully electronic digital clock for mains operation. Produced from 1980 to 1991 the DN 30 s resembles the electronic DN 40 in terms of form. All operating elements, however, have been placed at the top plate. Remarkable is the green see-saw switch for the 24 hours alarm function. The DN 30 s is dissimilar from the DN 30 by an additional key ledge for the snooze function. Mains model in black and white.
Design: Dietrich Lubs, 1980.

Analog table and alarm clock with 24 hours alarm mechanism. The battery-powered clock is considered a follow-up model to phase 2, which was also produced at the beginning of the 1980s. The megamatic was the only Braun clock without digits on the dial. Largely similar construction data as the AB 44. Battery model in black and white.
Design: Dietrich Lubs, 1980.

Analog alarm clock, vertical formal. The longitudinal formal hitherto favoured by Braun was abandoned for the first time with this compact battery-powered clock. Keys for the alarm function are exceptionally large and ensure easy handling. Later models such as the Ab 30 s, AB 30 vs and the AB sl vary in small details. AB white and black with black and white dial, AB 30 vs and AB 30 sl in black.
Design: Dietrich Lubs, 1982.

Analog battery-powered model in various colors. The AB 31 is similar to the AB 20. The see-saw switch for the alarm is placed on top. Battery-model in black, white, brown, grey, light grey and blue.
Design: Dietrich Lubs, 1982.

Analog battery travelling clock with snooze function. This new type of clock was the first of a new generation of extremely flat and compact travelling alarm clocks. The slim housing is wear-resistant and bears a world time-zone chart on the protection lid. For the follow-up models AB 312 s/sl and vsl this Braun concept had been maintained. Battery model in black, AB 312 sl also in white
Design: Dietrich Lubs, 1982.

Analog table and alarm clock in 'reflex control' technology. Clocks of a decided 'edgy look' with expressively designed contours and grooves containing a technical world novelty. Just by the wave of a hand the alarm signal stops. The reflex control system is integrated in the upper part of the front plate. User-friendly the side-positioning of the knob for the setting of the alarm. Battery model in black.
Design: Dietrich Lubs, 1987.

Analog alarm clock in voice control technology. The AB 45 convinces because of its classic form with a rounded housing. The radii are repeated in the Operating switch and the integrated voice control element at the front. The dial has a remarkable design and can easily be read. Battery model in black.
Design: Dietrich Lubs, 1984.

Analog travelling alarm clock available as reflex control AB 313 rsl, voice control AB 313 rsl and quartz AB 313 sl. The AB 313 is a successful redevelopment of the Braun top quality battery alarm clocks. The basic form and the clear dial design remain unchanged with improved handling of the newly designed operating keys. The side battery container had been rounded off. The protection cover can only be closed when the alarm mechanism is switched off. Significant are the reflex control sensor elements. All models in black, AB 313 sl also in white.
Design: Dietrich Lubs, 1990.

Analog alarm clock whose rounded off housing had been designed to an absolute minimum. The lower wide integrated cylindrical battery locker serves as standing base. Battery model in black and white.
Design: Dietrich Lubs, 1990.

Digital multifunctional table and alarm clock. With the DB 10 sl Braun, once more, set standards in both design and technology where clocks are concerned. The strictly geometrical form with well readable digits on a slanted front renders the clock formal individuality. The housing had been given a side structure and thus ensures easy handling. The clear graphical design of the LCD display shows seconds, alarm time, variable alarm or date respectively. A new operating quality ensures easy data feed with convex, differently colored keys. Collection fans will be pleased to know that the first series was fitted with green alarm and 24 hours off-switch. Battery model in grey with green or grey keys, black.
Design: Dietrich Lubs, 1991

Digital table and alarm clock with automatic adjustment of time and date via an additionally fitted radio device. This top model within the Braun clock programme – apart from a few details – is identical with DB 10 sl. Battery model in black.
Design: Dietrich Lubs, 1991.

Analog alarm clock with 12 hours alarm system. Similar to the small version AB 5 the design had been reduced to the most important feature: the dial. The clock has a particularly user-friendly
alarm adjustment switch with large keys. Battery model in black.
Design: Dietrich Lubs, 1993.

Radio adjusted analog table and alarm clock with additional LCD display and automatic adjustment of time and date. The time can be read off an analog dial which can be slanted at three different angles. The display positioned underneath indicates seconds, date and the set alarm respectively. Other features are snooze function, 24 hours alarm mechanism and battery check system. The data feed is as easy as with the DB 10 fsl. Battery model in black.
Design: Dietrich Lubs, 1993.

Analog table and alarm clock with additional LCD display. Ouartz clock, similar in design and operating elements to the DAB 80 fsl. After inserting of the battery the hands are moved to the 12 h position. Then the exact time is set manually. Battery model in black.
Design: Dietrich Lubs, 1993.

From the extensive Braun clock programme we recommend all models mentioned in this article. From the design point of view the digital clocks rate among the most interesting. Out of the analog clocks the AB s and AB 20 in all colors are most important. he timeless neutral Braun clocks harmonize as useful information devices in all sorts of environments. Technology, dimensioning and user-friendly design have made considerable progress. Most important task of clocks non the less is to show the time. This demand has been fulfilled by Braun clocks for more than 20 years in exemplary design quality.