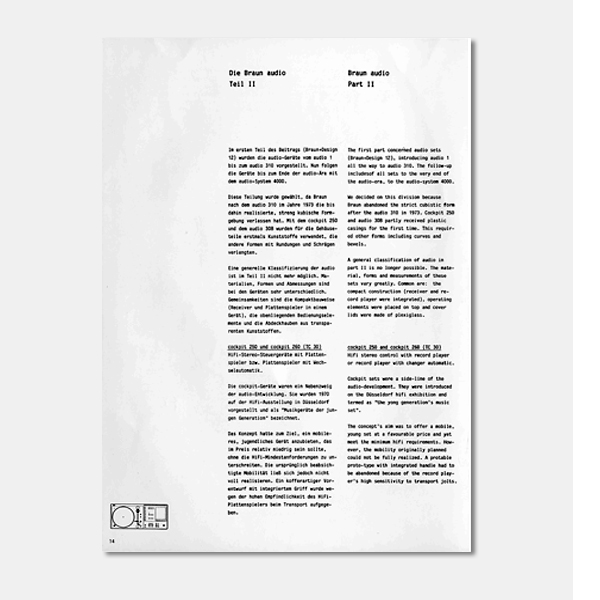 
The first part concerned audio sets (Braun+Design 12), introducing audio all the way to audio 310. The follow-up includes of all sets to the very end of the audio-era, to the audio-system 4000. We decided on this division because Braun abandoned the strict cubistic form after the audio 310 in 1973. Cockpit 250 and audio 308 partly received plastic casings for the first time. This required other forms including curves and bevels.

A general classification of audio in part II is no longer possible. The material, forms and measurements of these sets vary greatly. Common are the compact construction (receiver and record player were integrated), operating elements were placed on top and cover lids were made of plexiglass.

Hifi stereo control with record player or record player with changer automatic. Cockpit sets were a side-line of the audio-development. They were introduced on the Düsseldorf hifi exhibition and termed as "the young generation's music set."

The concept's aim was to offer a mobile, young set at a favourable price and yet meet the minimum hifi requirements. However, the mobility originally planned could not be fully realized. A portable prototype with integrated handle had to be abandoned because of the record player 's high sensitivity to transport jolts.

For the first time all casing parts of a hifi set were made of plastic. Thus the material required curves and bevels, not common with Braun hifi sets at that time. The tilted scale allowed for better reading. There were versions with a light-grey base and black cover and with red base and black cover. The red version may have been demanded by the marketing department to attract young buyers.

The following cockpit versions were on offer:

The casing's base bore the graphics 'Cockpit 260'. A red control lamp was integrated in the casing edge, socket to take the headphone plug had been installed at the side. No version with record changer were available. The turn table is no longer black as with cockpit 250, but aluminium-colored. As complementary units to the cockpit set served the L 260 loudspeakers (corpus white, fronts black) with rounded surfaces and decorative front perforation due to the material used.

In 1973 Braun introduced the new series 308 with the slogan: "The new Braun class: the 8° system." The characteristics of the programme were the plastic prefabricated construction and the operating unit tilted towards the user. The height of the casing was determined by the power transformator's measurements in the rear part of the set. To give the set a flat appearance, the upper part was reduced in size towards the front. The 8° angle thus achieved was the formal basis for a new audio generation consisting of audio 308, audio 308 S, regio 308, record player PS 358, record changer Ps 458 and L 308 loudspeakers.

Hifi sterio compact set with record player P 350 S. Same version as audio 308, yet with output 2 x 20 W sine power and 2 x 44 W music power as well as with a different cartridge system. The audio 308 S was manufactured with a black base and black upper part. A special model (limited number) was made of a black base and aluminium-colored upper part. The record player had a black turntable and black tone arm. They were only sold as a set together with L 320 loudspeakers.

Hifi stereo compact set with record player P 450 x. At the same time as the 308, the audio 400 was being developed with high technical resources and matching data. P 400 was related to the audio 308. Due to the trend then apparent unhandy slide discs were used which had to be placed on a desk-shaped slant.

The last of the audio-series, the audio system 4000, was built. A typical feature was the arrangement of the operating part on the upper side. Three basic elements were integrated to one compact set: receiver amplifier, record player and cassette deck. The casing was made of cord profile. The sides were closed by plexiglass. A formally interesting and rational construction. Operating via feather-touch push-buttons.

Hifi stereo compact set with record player P 550 SX. The S 4000 audio system was also a combination consisting of receiver and record player. The radio was laid out for FM, MW, long and short waves. Six stations computable via sensors for FM and LED. The amplifier had an output of 2 x 40 sine power and 2 x 60 W music power. The base was made of metal steel plates overlaid in graphit; plexiglass lid. Measurement: 70 x 12 x 36 cm (w x h x d).

The cockpit 250 S/ SK and the regie 308 with the L 308 loudspeakers are interesting pieces for a collector. Audio P 4000 and audio PC 4000 are very aesthetic compact systems which round off an audio collection. The latest audio sets have also received countless national and international design awards as well as high-ranking recognition for their technical quality. The audio system 4000 was the last set of the audio range to be manufactured based on the HfG concept of Hans Gugelot and Herbert Lindinger. New radio and broadcast technologies allowed for new concepts and formal solutions which were introduced by Braun by means of integral elements.