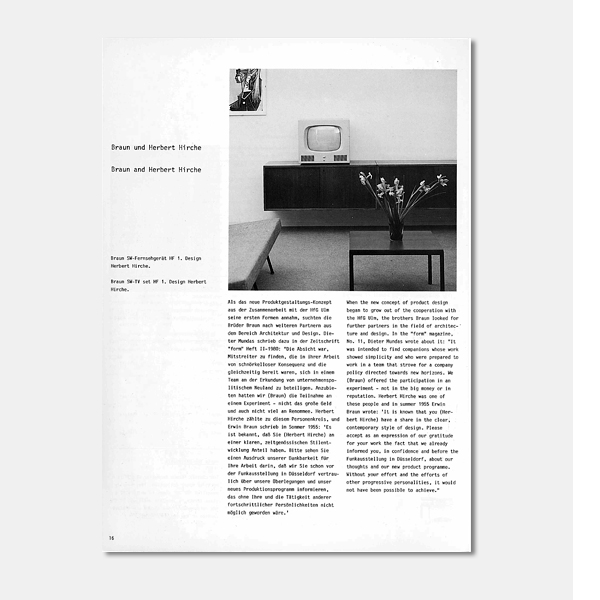 
When the new concept of product design began to grow out of the cooperation with the HfG Ulm, the brothers Braun looked for further partners in the field of architecture and design. In the "form" magazine, No. 11, Dieter Mundas wrote about it: "lt was intended to find companions whose work showed simplicity and who were prepared to work in a team that strove for a company policy directed towards new horizons. We (Braun) offered the participation in an experiment - not in the big money or in reputation. Herbert Hirche was one of these people and in summer 1955 Erwin Braun wrote: 'lt is known that you (Herbert Hirche) have a share in the clear, contemporary style of design. Please accept as an expression of our gratitude for your work the fact that we already informed you, in confidence and before the Funkausstellung in Düsseldorf, about our thoughts and our new product program. Without your effort and the efforts of other progressive personalities, it would not have been possible to achieve'."

This was the begin of the fruitful cooperation between Braun and Prof. Herbert Hirche. Erwin Braun 's connection with Hirche is underlined in the ensuing text, "herbert hirche. architektur innenraum
design, 1945 - 1978", a catalogue which was published in 1978 on the occasion of a Hirche exhibition in the Landesgewerbeamt Stuttgart and other cities.

"A national furniture study was made by a team lead by our mutual friend, Dieter Mundas. The two most important results were, that there might be enough interested buyers for our wireless sets provided we installed the right technology into corresponding housings. And ... the furniture on exhibitions and in catalogues which appealed to us above all were designed by you, dear professor Hirche. We got all the information we could get, realized that you had been assistant to Mies van der Rohe and decided to ask you to work with us. With great delight I recall your quiet, unobtrusive manner when you explained yours designs in a few words. Your work said enough. You helped us greatly to convince the older colleagues bit by bit that our new way lead in a good direction. With your appliances and the works by Hans Gugelot a development was started which made all future steps seem natural.

Our PR and information material had become useless. The illustrations, the text, the lay-out - nothing was as before. Everything was thought over critically and a new concept was made. Thus the department for wireless technology started an innovation process that took over all other areas.
With special gratitude I recall the Interbau, the new Hansa quarter in Berlin: Within the many show flats only our radio sets were on display, most of them after your designs, and often in union with furniture you also designed. Or think of the photo of your unpretentious television set in the Federal Republic's glass pavilion on the Brussel World Exhibition. An exhibition system you especially created toured the world for "Braun - The Company Profile". The famous Museum of Modern Art in New York introduced Braun, and on the Triennale in Milan we were awarded the "Gran Premio" for the whole programme."

In addition, here are excerpts from a letter Herbert Hirche wrote on the occasion of Erwin Braun's 60th birthday in 1981:

"I remember the beginning gladly. lt started with your personal message to me, your letter in the summer of 1955. You were looking for designers and people with the same philosophy. And in 1955 we met for the first time. First designs were presented to Braun. All went step by step.
And so the series of wireless sets, record, players and television sets was done as my small contribution to the history of Messrs. Braun in the fifties. I glad recalI the busy hours in the 'upper
room' of Braun in Frankfurt. lt was here where we introduced the models and redeveloped them together with your employees and friends ... .What interested and fascinated me again and again whenever we met were your ideas, your task of life, your strivings for the actual qualities of life, or the foundations and values of an existence relating to nature. Again I recall 1955. lt was a real experience for me to meet with such attitude and harmony - to meet the head of a company who, even beyond all industrial forms, felt obliged to influence man in his complexity, who realized that the whole human quality is a part of progress, of the quality of technology and design. I, and all who experienced it as a historical fact, understand that it was your great personal merit in the 50s that the intellectual foundation of a company was found which became trend-setter, model and international standard for the quality of design for so many years."

For Braun Herbert Hirche designed many 'sound furnitures': radio sets, television sets, record players and combinations. The first set was the music and television cabinet 'HFK' in 1956. For this article we chose the exemplary television set 'HF 1' from 1958. One of the trend-setting Braun products which holds a special place in the history of design, together with the 'FS-G' by Hans Gugelot.

The form and execution of the 'HF 1' was far ahead of the 50s fashion. lt was the first tv-set without visible woodwork, overlayed with a light grey plastic front plate. Its design was consequent and symmetric. The loudspeakers were arranged to the bottom left and right, the on-switch in the middle above the Braun emblem was well-proportioned to the screen. The on-switch was the only visible control. The housing, dark-grey lacquered wood with a round loudspeaker opening on its left side, created a harmonic coloring which reduced the size of the set optically. In connection with its black lacquered steel foot the 'HF 1' held an almost filigree air of lightness. The controls were fitted behind a drop front in the upper housing side - an arrangement found only in later generations of television sets. An optimal sound quality was reached by the two loudspeakers, one at the side and one at the front.

The 'HF 1' was equipped with the progressive Telefunken technology.

Born 1910 in Görlitz, Silesia. 1924-29 carpenter's apprentice, skilled workman, travels. 1930-33 student at Bauhaus Dessau and Berlin of Albers, Kandinsky, Hilberheimer, Mies v.d. Rohe, Lilly Reich and others. 1934-38 assistant of Mies v.d. Rohe and Lilly Reich. 1939-45 assistant of Egon Eiermann. 1948-50 Lecturer and professor for architecture at the Hochschule für angewandte Kunst Berlin-Weißensee. 1952 called to the Staatliche Akademie für Bildende Künste, Stuttgart. Since 1948 freelance as architect and designer. 1960-70 member of the Rat für Formgebung. 1969-71 head of the Kunstakademie Stuttgart 1970 founding of the hircheteam, Stuttgart. 1971 honorable president of VDID. 1977 honorable president of Kunstakademie Stuttgart. Meanwhile, Herbert Hirche has retired from all professional activities, he lives in Stuttgart.

A hint for Braun collectors

The 'HF 1' is one of the most important and most beautiful Braun sets with high national value. Anyone fortunate to acquire a 'HF 1' ought to make it a standard piece of his collection.