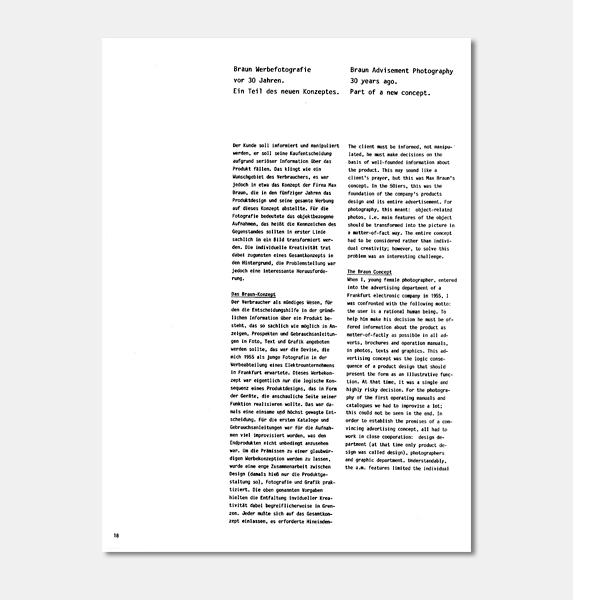 Braun Advisement Photography 30 years ago. Part of a new concept.


The client must be informed, not manipulated, he must make decisions on the basis of well-founded information about the product. This may sound like a client's prayer, but this was Max Braun's concept. In the 50iers, this was the foundation of the company's products design and its entire advertisement. For photography, this meant: object-related photos, i.e. main features of the object should be transformed into the picture in a matter-of-fact way. The entire concept had to be considered rather than individual creativity; however, to solve this problem was an interesting challenge.

When I, a young female photographer, entered into the advertising department of a Frankfurt electronic company in 1955, I was confronted with the following motto: the user is a rational human being. To help him make his decision he must be offered information about the product as matter-of-factly as possible in all adverts, brochures and operation manuals, in photos, texts and graphics. This advertising concept was the logic consequence of a product design that should present the form as an illustrative function. At that time, it was a single and highly risky decision. For the photography of the first operating manuals and catalogues we had to improvise a lot - this could not be seen in the end. In order to establish the premises of a convincing advertising concept, all had to work in close cooperation: design department (at that time only product design was called design), photographers and graphic department.

Understandably, the a.m. features limited the individual creativity. Everybody had to submit to the concept; you had to think about the problem, you had to work in a team. All a.m. means of advertisement had to submit to one concept - drawn up by Otl Aicher of Ulm Design College.

The task was: photography as a visualized form of information had to cut out all special effects. The picture should present the object or the produts in relation to its environment. The picture must primarily relate to the products and should form a unity together with the text.

For the photographer this meant: A uniform background, mostly white i.e. neutral, no horizontal line. The view-point was the most important feature, we mostly chose a frontal view, as long as it stressed the functional features of the device. Artificial light was preferred to render a shadowless effect. The devices and sets were made of light-coloured wood or meta!. lt was not a very easy task since the objects must be seen in front of the white background. The effect had solely to be reached by photographical means, a later touch-up was not allowed or only tolerated as an exception.

A !arge studio was installed where objects and environments could be realised. Environmental photography was important to show the measurements of the objects and at the same time because the new devices harmonized best in a modern environment, without kidney-shaped tables or lamps made in the 1950ies. This was not easy in those days. A number of products of associated manufacturers helped with the decorations for the set.

National and international architects used Braun products to decorate their 'show-room' apartments on this exhibition. For a long time, they had been waiting for modern radio and other musical sets to harmonize with architecture and matter-of-fact interior decoration. This was a set put together by first-rate architects. For us this was the opportunity to act, to present Braun products in public. Ingeborg Kracht and me were commissioned to care for the photos. In order to be able to work undisturbed we used hours were some of the buildings were closed to the public, on the whole we preferred working nights, since for coloured shots we could not use mixed light. Selections and segments could be chosen by us, two years of work in the studio proved very valuable for us. Focal points were the objects themselves. Excerpts of the environment were of minor importance. The camera stand point had be carefully selected, the whole composition of the picture had to be corrected. Crosssections made the picture uneven and unclear, they had to be eliminated. In environmental shots the focal point was on the devices, the environment was a little unclear. This required a precise calculation, because not only should the contures of the devices be put to contrast, a lively atmosphere should be created, the environment should not be dissolving in the haze. Illumination of the environmetal shots could be realized entirely without shadows, this could not be achieved with our equipment.

The mixing of the colours was or major importance, because the colours photos should not be multi-coloures. Accents should harmonized in order not to diviate from the essential point, at the same time liveliness had be created. All shots were made with a Linhof 13x18 cm. Colour liquid which had been tested beforehand helped with the filtering. The photos were developed on the next day. Eight days later we felt at home on the Interbau, the employees were used to see us work at night.

World Exhibition at Brussels in 1958

The German Pavillons on the Brussel World Exhibition in 1958 were designed by the architects Egon Eiermann and Sep Ruf. A number of flat glass-metal constructions, linked by corridors, were convincing in their clear forms and their transparence. A strict choice of "high-rank products of industrial and handicraft". Sixteen Braun products, among them radio and phono combinations, counted among the 'chosen few'. Most of the sets were placed in cabinets, except the Studio 1 which had been positioned in the library. No environmental  shot could be taken here.

The Success of the Concept

A !arge number of Interbau and World Exhibitions photos were included in the following catalogues. One year after the Interbau Braun Design was well established. What nowadays appears incomprehensible: the concept was a success. In the first place the product design was reduced. International awards like Triennale and the admittance to the Museum of Modern Art (New York) became more frequent. lt would take a whole article to mention them all. In a 1975 number of the SPIEGEL we read: "Almost all competitors imitated the Braun Design ... ."  And: "Besides the futuristic Rams sets - the shocked competitors nicknamed it 'Snow Whites Coffin' in self-defense - all competitors' radios appeared like 'things from the land of the seven dwards', according to US news magazine 'Time'." Braun Design became well-known, people talked of the Braun Style .

The design of the products and advertising means should not overwhelm the buyer in a short and sharp attack, his decision should be made by itself as the result of the information given him. Without doubt, this concept became history, as proven over the years. In 1961 the expanding enterprise was turned into a corporation. In 1967 a US company buys the major share. The advertising departments were closed, the product design department remained.

In our time, where the post modern phase has already been substituted by the deconstructivism, where we have become indifferent to loud advertisement, to poses and non-originality, we could perhaps consider whether such a concept could cause big irritations again.