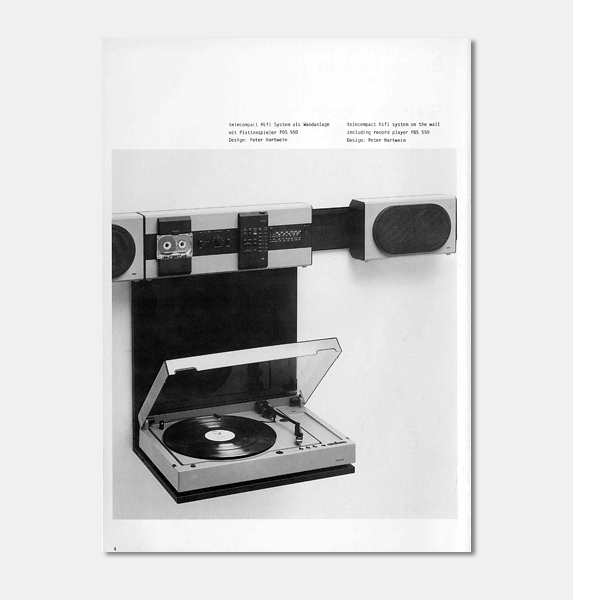 
In this article, we are introducing four Braun sets which had been developed, successfully passed the marketing tests - and still did not go into production. Which is a pity, since the individual items bore particular technological and design features far advanced at their time; an important aspect from today's point of view.

Braun statement: typical Braun 'niche' product of high user quality and optimal design, easy operation, favourably priced at approx. DM 1.500, --. The telecompact system was designed by Peter Hartwein. lt could simply be placed upright or tilted by aid of a curved metal support on the back. The system could also be hung up by means of a wall fastening device. Easy operation via IR remote control, which, could be incorporated into the system if not used.

The outdoor 2000 had an uncommon, Braun non-typical asymmetrical design. In other words: it consisted of two housing parts put together by an elaborate specific mechanism; in operation the two parts could be pushed apart, thereby enlarging the distance between both loudspeakers and improving the stereo sound effect. The discongruous positioning of the loudspeakers further helped to improve the sound. This - on first sight - doubtful and uncommon asymmetrical Braun design now explains itself as logical and rather functional. The closed frame protected both operating keys and cassette deck, which had been fitted into the bottom part of the set. The outdoor 2000 set, an intelligent design fit to be the first of a totally new generation.

Braun statement: small easy to handle travelling receiver of superior worldwide short wave reception. Every Braun enthusiast will think of the T 1000 when he reads the words world receiver. Yet, the Braun travel 1000 was to be marketed 25 years later. The small housing showed the astounding miniaturisation in electronics which had meanwhile taken place. Where in former times scale and indicators had been necessary, today one finds sensor keys and a CCD display for digital read-off.

This was the reason why Dieter Rams was able to design a relatively small device, not bigger than the palm of a hand. A curved metal support and a telescopic antenna (to be snapped to a handle when shoved together) were fitted on the back.

One of Dieter Rams designed radio alarm clocks was given little chances to be admitted to the 'chosen few'. In this product range countless manufacturers offered their sets at dumping prices. The Braun radio alarm clock would have been a 'niche' product for people who wanted to start the day by revelling in a beautiful Braun device and enjoying aethestically superior quality. This group of clients was too small for Braun.