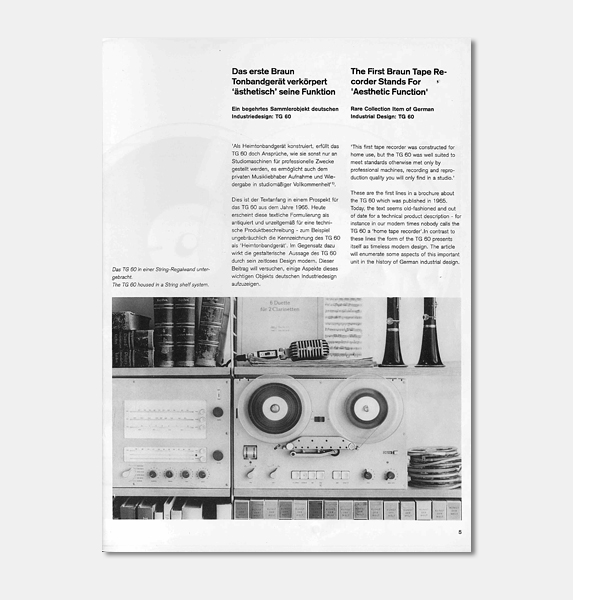 
'This first tape recorder was constructed for home use, but the TG 60 was well suited to meet standards otherwise met only by professional machines, recording and reproduction quality you will only find in a studio.' 1)

These are the first lines in a brochure about the TG 60 which was published in 1965. Today, the text seems old-fashioned and out of date for a technical product description - for instance in our modern times nobody calls the TG 60 a 'home tape recorder'. ln contrast to these lines the form of the TG 60 presents itself as timeless modern design. The article will enumerate some aspects of this important unit in the history of German industrial design.

Again and again collectors have wondered about the meaning of 'TG 60'. The two letters 'TG' can easily be identified. They stand for the German 'Tonband Gerät'. The figure '60' is a link derived from the serial number of the tube amplifier CSV 60 and the loudspeaker/ basic unit L 60. The figure also indicates the decade '60ies' in which the model first joined the market.

Dipl.-Phys. Wolfgang Hasselbach, former head of Braun's electricacoustic division, explained why the Braun Tape machine was marketed relatively late. Because of a shortage in technical staff one had to look around for a professional team of well-trained experts. Secondly, further difficulties had to be solved when trying to place an adequate cooling system into the relatively small housing.

lt is always worth-while watching. You operate the 'on/off' switch. A distinct 'click' is heard, the magnet pulls the lever and the rubber roller with it towards the sound head and the tape spools start to move. The observer will watch with fascination how the tape is pulled from the left-hand to the right-hand spool, thereby passing the rubber roller and the sound head. A second 'mobile part' are the two indicators fitted at the control 'panel', which was designed by Dieter Rams, shaped as a slightly protruding semi-circular cylinder. The function of the TG 60 is thus aesthetically determined.

The professional appearance was not so much enforced by the 18 cm spools largely used in amateur tape machines, but rather by exchangeable sound heads and three additional sound heads plates positioned underneath, the twelve small adjustment screws and two chromium-plated screws. Originally, an exchangeable sound head plate and a set of four-track sound heads was to have been offered - but instead new follow-up models such as the TG 502, TG 504 and TG 502/4 were produced.

Which were the prototypes to this first Braun tape recorder?
'There were no prototypes, since it had never been our intention to build a high-priced studio machine or a low-priced model for amateurs. lt was planned as a good machine that fitted into the Braun concept,' said Wolfgang Hasselbach comparing competitive machines in a paper during the pre-production phase of the TG 60. 'Of course we had a look at the large Telefunken studio machine M 5, which was driven by three motors, had an open band segment, was fitted with three sound heads and an exchangeable sound head plate. We also had a close look at the Revox 36, we admired its technology. And in this phase we were not impressed by a low-priced amateur model developed by Grundig and others.' 2)

The TG 60 - the tape machine that fitted into the audio line
The very successful compact audio 2 line was extended by another hifi segment. Dieter Rams was responsible for the design and the integration into the audio 2. Here all individual moduls had identical measurements in height and depth. The slim construction features were ensured by the new transistor technology which made such measurements possible. Standing side by side both models became one visual unit, combined with simple logically structured operation elements.

The TG 60 completes the wall system
Because of the vertical assembly (in operation) the system could be hung on the wall. The control unit TS 45, the tape recorder TG 60 with the loudspeakers (of the L 450 series) placed to the right-hand and to the left-hand sides make the series an interesting object. 3). Today, it is greatly valued by collectors, and prices have gone up for quite a while.

Although the TG 60 and the TS 45 were fitted for wall installation a number of difficulties in the shape of slight damages of the lacquered surface of the units occurred occasionally. An instruction manual with detailed description for wall assembly is therefore strongly suggested. At this point the mains connection and the aerial must not be forgotten. However, all problems will soon become meaningless once the system starts to work. The TG 60 shows a particularly functional aesthetic design which no Braun collector can resist.

Hints for Collectors
The TG 60 is one of the most popular Braun tape recorders, even more popular than the follow-up models TG 502, TG 504 and TG 502/4. A well-functioning model will fetch a good price with a possible increase in the future. Yet attention must be drawn to the fact that typical wear damages may occasionally be found at the sound heads and the large rubber pressure roller. Of course, all other rubber and drive parts are largely subjected to fast wear. In case the rubber has not yet hardened, but retained a smooth surface, a little alcohol and sanding paper will soon restore the part to a perfect original quality. We also recommend to remove all resin from the movable parts by means of alcohol and to apply a new layer of a suitable oily substance.

Dear Readers
We are always on the look-out for help, spare parts, repair assistance and workshops that specialize in the reconstruction of the TG 60. Who of you can tell us how to renew the rubber roller. Which kind of sound heads can be used as substitutes? Which counter (by other manufacturers) can be installed? What kinds of spare parts, repair manuals, brochures and information are you yourself looking for at the moment?

Please let us have your comments. Letters will be published in the next D+D number. Please write to us under 'Readers help readers - TG 60'.