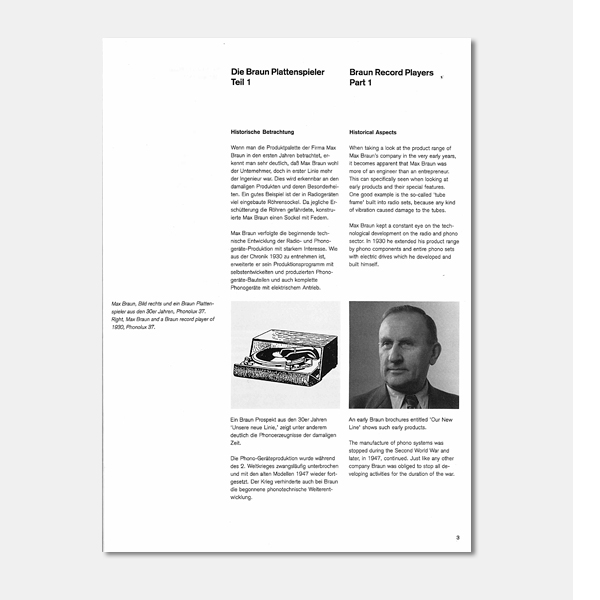 
Historical Aspects
When taking a look at the product range of Max Braun's company in the very early years, it becomes apparent that Max Braun was more of an engineer than an entrepreneur. This can specifically seen when looking at early products and their special features. One good example is the so-called 'tube frame' built into radio sets, because any kind of vibration caused damage to the tubes.

Max Braun kept a constant eye on the technological development on the radio and phono sector. In 1930 he extended his product range by phono components and entire phono sets with electric drives which he developed and built himself. An early Braun brochures entitled 'Our New Line' shows such early products. The manufacture of phono systems was stopped during the Second World War and later, in 1947, continued. Just like any other company Braun was obliged to stop all developing activities for the duration of the war.

G 12, 1955
The phono system consisting of the record player G 12 and radio G 11 was introduced on the 1955 Düsseldorf Radio Exhibition. The slim Valvo chassis had to be chosen for the phono part since no other brand was available. The record player was suitable for all records commonly used in 1955 including the 78 rpm Schellack records. The crude stylus system together with the counter-weight were made to measure for the 78 records whereas the high-quality 45 singles and 33 albums had to suffer. The wooden chassis for the record player and the radio were both designed by Hans Gugelot. The light-coloured maple - which freshly cut and manufactured looks almost white - was compared to contemporary records players in 1955 unusual, just as the rectangular shape. The form commonly used at the time had a slight baroque touch, complete with walnut veneer and well-polished lacquer overlay. The record player received the same basic measurements as the G 11 radio, it could either be placed on top of the radio or right next to it. Thus, both systems appeared as a unit.

When in 1956 the new record player PC 3 had been finished, Braun's own chassis could be installed in all following models.

PC 3, 1956
Wilhelm Wagenfeld and his team played a decisive role in the development of the chassis. Wagenfeld was commissioned to design a record player to be fitted into the radio and phono combination SK 4 which was just being put together. Dieter Rams and Gerd A. Müller were also involved in the design process.

The three-point support used in the first trials was shortly afterwards replaced by a five-point support resulting in more stability for the record. The conically shaped pick-up arm was a modified version of the one used in the portable 'combi'. The turntable was driven by a so-called 'friction mechanism' at four different speeds. lt was a turntable with a striking feature: Placed in the centre was the knob for the exact positioning of single records. For album playing the knob was sunk into the frame below. The pick-up arm had a serialized stylus system with two different stylus, one for single, one for long-play records. This chassis was integrated into the SK 4 and all other Braun radio/phono systems.

The following text is taken from a Braun brochure of 1959 which affords us a retrospective glimpse on the simple technical standards of the early years: 'The weight of just 5 g did little or no damage to the records. The stereo stylus part is robust and wear-resistant, the stylus itself is buffer-protected by springs.

P 1 (Battery-powered), 1959
The smallest record player by Braun called P 1 was developed and built in 1959. lt was specifically suitable for 45 singles, connectable to a portable receiver and driven by batteries. Here we come across another striking feature: the stylus system was placed underneath the records. When switched on manually, a small 'window' was opened simultaneously at precisely the right starting point.

Since the relatively small metallic centre part was used as a turntable the operating quality was by no means optimal. However, where ever the small P 1 - in combination with the portable TP 1 - was seen and heard it was received with due praise.

PCS 4, 1961
Dieter Rams changed the pick-up arm form of its predecessor PCS 3. The softly shaped form was replaced by a rectangular design. The turntable received a circular rubber surface. The mechanics of the drive were only slightly altered.

The record player chassis was integrated into the systems commonly used in 1961. As for instance the SK 6/61, the atelier systems and others.

PCS 45, 1962
The PCS 45 was the first record player with a pick-up arm made of a small bent metal tube. The pick-up arm could either be taken off or replaced by a variety of different systems. The PCS 45 was offered with the usual stylus system or with a magnetic system, as for instance the Shure M 77. For this purpose the pick-up arm was fitted with a counter-weight and a fine-adjustment. The improved drive ensured smooth performance at four speeds of all records available.

For the first time, the chassis was integrated into the slim compact transistor-driven audio 1 system.

PS 2, 1963
The last record player chassis with the so-called friction mechanism was the PS 2 with its characteristic semi-circular aluminium pick-up arm. The sound head and the aluminium tube appeared as a unit and could only be operated with the inbuilt stylus system. Here again the model came with a counter-weight and fine-adjustment. The system could be operated at three speeds, abandoning the 78 rpm speed. The PC 2 was used for the last 'Snow White's Coffin', namely the SK 55.

PCS 5, 1962
With this record player Braun entered the field of high fidelity. In their brochures they preferred to use the term 'studio quality' thereby meaning radio station quality. I order to reduce the 'by-sounds', the so called ' rumbling', caused by the motor, a special combination of friction and elastic rubber mechanisms underneath the turntable was used to solve the problem.

The motor and all other parts were carefully selected in order to ensure 'rumble-free' and stable drive properties. The dynamically balanced turntable measured 2,5 cm (thickness) and almost 30 cm (diameter), it weighed 3 kg, thus avoiding instable operation - with excellent results.

An automatic stop was not provided for the simple reason that professional radio stations preferred them like this, changing their records during operation. Also the high-quality system and the stylus were thus better protected.

The serialized pick-up arm added a professional appearance to the system although its single parts were rather large. The mobile construction was mounted on a bearing-system. lt could be mechanically adjusted for almost every weight between 0.8 and 8 pond. The pick-up arm could be taken off. Suitable for use in almost every Braun hifi system, its mechanical lowing mechanism was highly advantageous for records. The u-shaped plexiglass hood kept off dirt and dust particles.

PCS 51, 1962
The record player was fitted with the same drive as the PCS 5, but with a different sound-arm, namely the Stereo Dynetic pick-up arm M 222/226 by Shure. A straight-forward well-balanced pick-up arm with the solidly fixed system M 226.

PCS 52-E, 1965
The drive installed in this record player was that of the PCS 5 together with the high-quality, almost legendary Shure-SME 3009 pick-up arm which is still in use today. The pick-up arm had always been a technical speciality, of high precision and top performance. Design+Design No. 31 included a detailed article entitled: The secret High End Systems.

Together with this pick-up arm Braun produced a sophisticated high fidelity record player which was only slightly inferior to professional studio gear. A real high end system any time.

PS 1000, 1965
When starting upon the development of the PS 1000 a new generation of record players was introduced. The PS 1000, later used as a component of the legendary studio 1000 system, was to become Braun's most famous record player. The optically sophisticated system kept its revolutionary technology well-hidden. For instance with a relay control, initially introduced with the PS 1000. By using ultrasensitive keys the system needed little more than a gentle touch to be put into operation. The new phono-electrical and user-friendly automatic stop was especially advantageous for both stylus and system. The sound head could be adjusted to up to 0,4 pond, thereby creating as little scratches as possible during performance.

PS 500, 1968
Technologically and quality-wise the PS 500 must be seen as a predecessor. lt was well equipped and of good technical standard, but on the whole less expensive. The model was robust and reliable, often used in discothecs where it performed effortlessly for hours on end. Further components and equipment for this purpose were added to the Braun product range.

With an overall production figure of 44,000 units the PS 500 was economically very successful.

PS 600, 1969
The PS 600 was equipped with an automatic record changer which could optionally also be operated by hand, with record changer or without. With the exception of the record changer the entire unit was driven by the motor which had already powered the PS 500. An additional oil-hydraulic non-vibration chassis was installed. The pick-up arm, however, was the product of a whole string of compromises, since when the record stack was constantly reduced in height during automatic operation the arm would gradually be lowered. This resulted in a disfavourable angle between pick-up arm and records which, in turn, resulted in poor performance.

On the whole and in spite of these disadvantages the PS 600 performed tolerably well. Optically, it was definitely superior to brands common in 1969, at any rate acceptable to music lovers and the aesthetically interested.

PS 400, 1965
The PS 400 was to become a record player of the favourable price range. Optically, it was based on similar design parameters later to be found in the TS 45 and TG 60 series. lt was regarded as a good and top-quality record player with friction mechanism, rubber belt and large well-balanced turntable. lt was equipped with a semi-automatic pick-up arm, automatic stop and rotation adjustment which were later integrated in all following models. The well designed and round-shaped tube pick-up arm with counter-weight was fitted with a lift-off pick-up arm fastener. The chassis was primarily built into audio systems.

Almost every year the PS 400 was gradually improved and each new type renamed. The basic chassis was also used in follow-up models.

Especially for Collectors
With the exception of certain well-known models Braun record players have as yet failed to gain the collectors' acceptance which they truely deserve. Apparently this is due to a relatively high amount of units produced. Another reason for this may be that the market abandoned the long-play records in favour of CDs.

One of the most treasured types of Braun record players is the G 12, the battery powered type P 1 (if possible in combination with the TP 1 /2), the rare and technically well-performing P 701 and the last model in the atelier series P 4.

Part II of 'Braun Record Players' appears in the next number of 'Design+Design' when we will take a look at record players between 1973 and 1984. We will also inform you about sound head systems and stylus programmes, taking of course in to account all types and models available. A third article is planned which looks into repair problems and availability of spare parts.