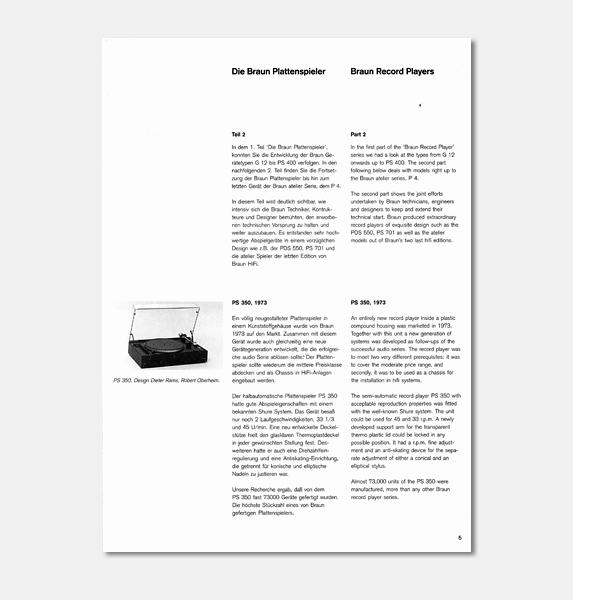 
In the first part of the 'Braun Record Player' series we had a look at the types from G 12 onwards up to PS 400. The second part following below deals with models right up to the Braun atelier series P 4.

The second part shows the joint efforts undertaken by Braun technicians, engineers and designers to keep and extend their technical start. Braun produced extraordinary record players of exquisite design such as the PDS 550, PS 701 as well as the atelier models out of Braun's two last hifi editions.

PS 350, 1973
An entirely new record player inside a plastic compound housing was marketed in 1973. Together with this unit a new generation of systems was developed as follow-ups of the successful audio series. The record player was to meet two very different prerequisites: it was to cover the moderate price range, and secondly, it was to be used as a chassis for the installation in hifi systems.

The semi-automatic record player PS 350 with acceptable reproduction properties was fitted with the well-known Shure system. The unit could be used for 45 and 33 r.p.m.. A new developed support arm for the transparent thermoplastic lid could be locked in any possible position. lt had a r.p.m. fine adjustment and an anti-skating device for the separate adjustment of either a conical and an elliptical stylus.

Almost 73,000 units of the PS 350 were manufactured, more than any other Braun record player series.

PS 358/PS 458, 1973
These two record players with the striking '8 degree form' received the PS 350 or PS 450 chassis. The housing with the slight tilt consisted of plastic compound. Designer Dieter Rams did not want to 'camouflage' what was then considered an inferior material plastic. He rather wanted to demonstrate the value of the new material and the interesting variety of forms it offered. The record player was front-loaded, the base consisted of pressed polystyrol. Manufacture in the 1970s was uncommon and proved difficult.

The 'young form' was mainly developed for the younger music lovers.

PS 550, 1976
Yet another new generation was to be created with his high-quality hifi record player series called PS 550.

Technically most striking feature was the so called 'control disc' which was used to transfer all required commands to the pick-up arm. Almost all of the functions in this belt-driven system were electronically controlled. There was photo-electric control for ON/ OFF functions, the electro-thermal control was needed for the pick-up arm lifting device while the anti-skating was controlled electrically. The record player was considered wear- resistant and maintenance-free. Thanks to the high degree of automatisation, the record player achieved extraordinary performance properties.

The PS 550 itself and all other units of the series were thoroughly designed to the smallest detail. They were an optically and acoustically attractive, a pleasure to look at, delightful to listen to.

PDS 550, 1977
The 1977 top model, D meaning 'direct', because the turn-table was driven directly by the motor, a definite ad-vantage in favour of smooth reproduction properties. lt pick-up arm was black, the turntable sported 12 rubber knobs. lt had flat sensor keys for all functions.

P 501, 1981
This model came with the same chassis as the PS 550 E. The turntable was driven by a slow DC motor via a flat belt. An automatic sound arm control and a photo-electrical scanner facilitated the operation. Manual adjustment of the pick-up arm by means of a control disc. Records started with a slight relay to avoid cracks. In comparison with the PS 550 S this model's pick-up arm was a little slimmer.

P 701, 1981
In a brochure about the P 701 Braun described the record player as one of the top models within the international hifi class. Compared with the PSD 550 - with their similar look - the P 701 offered a few specific technical features. lnstead of sensor keys, this model received reliable 'keyboard' keys. Quartz-driven direct drive and a special bearing system ensured smooth properties. The P 701 was fitted with a moving-coil system with elliptical stylus.

P 1, 1980
The last series of record players by Braun a/d/s/. The individual components could be arranged side by side of on top of each other. Here the record player P 1 received a slightly protruding special lid. Operating elements of the atelier players were arranged outside the covering lid, which could be closed right after positioning of the record. All controlling took place from outside.

A special feature could be found on the back of the record player where all connection cables were hidden behind a small covering lid. The system could be set up in the middle of any room without having to cope with an optically disadvantageous back side. The P 1 received a direct quartz-drive, it was a fully automatic system with a motor-driven pick-up arm.

In 1990, the atelier record player series and their components made up a spectacular special sales of the so-called 'Last Edition' which marked Braun's decision to stop all products of the hifi range.

P 2, 1982
The directly driven record player P 2 was treated in the so-called ULM process to avoid acoustic feed-backs from pick-up arm and record. lnstalled in the pick-up arm was the 'Ortofon' system. The sound arm was less weighty and received a slightly different form.

P 3, 1982
This record player received the quartz controlled direct drive resulting an the excellent date of 0.04 %. All other specifications as the P 2.

P 4, 1984
The P 4 was the best atelier record player and also the last ever to be built by Braun.

A micro-processor controlled the fully automatic player with its superior moving-coil pick-up arm system. This exquisite model united all other technical properties of his predecessors. Additionally, it received a unique control via the RC 1 remote control.

Resume
With the introduction of CD players record players lost much of the significance they used to have during the 60s and 70s when most of the 'canned music' was supplied on records. Their role today is more that of an attractive detail than a hifi component.

Technical data of the above listed Braun record players were taken from 'Braun+ Design Collection'. A variety of details worth knowing are included in the book, many of which have not been mentioned in the above article. For further information please also see ' Braun+Design Tax List', a paperback which contains origin al retail prices, production figures and three different price categories (in DM).

Hints for Collectors
With the exception of the early models, which have been dealt with in Part One of this mini series three types of models are worth mentioning. Particular attention is due to the 500 and 700 models out of the 'studio line' and 'slim line' series. They are specially attractive models with carefully designed details. Their high technical quality and hifi properties underline the sophisticated design. The most important model is the P 701, an exceptional system, produced just over 900 times.

Since most of the aesthetic Braun record players never failed to leave a lasting impression because of their excellent reproduction qualities they are a must for the enthusiastic Braun hifi collector.

Record Care
A record is a very sensitive object. Reproduction quality may suffered seriously from careless handling. During the 60s and 70s Braun published booklets containing hints and tips for the proper handling of records for optimal acoustic value. Today, the careful treatment of records is as important as it used to be. In 1961, Braun wrote in a booklet:

'Frequent use of records leads to larger grooves, resulting in poor reproduction quality in the higher frequency range. Sharp edges will also add to the rapid damaging of stylus and records alike. 'A faulty stylus causes damage to the records, poor records lead to rapid wear of the stylus. In order to curb these unavoidable problems both record and stylus should be carefully cleaned before the actual playing. Records should be kept in clean dust-proof covers.