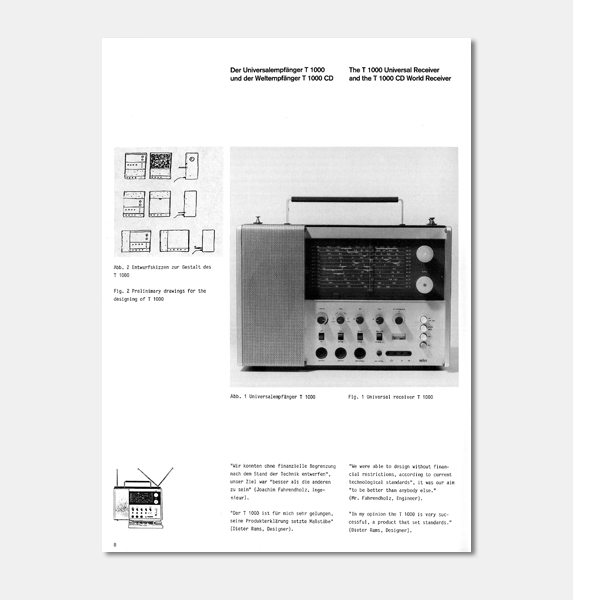 
"We were able to design without financial restrictions, according to current technologica l standards", it was our aim "to be better than anybody else." (Mr. Fahrendholz, Engineer).

This article characterizes merely those technical concept assumptions which influenced the T 1000 CD design. The ones relevant for its significant design features: the exterior, the front meta! lid, the product graphics and the selector.

In 1962/63, the T 1000 was drafted as a universal receiver for broadcasting and telegraphic reception. This entailed design commissions for a number of operating and adjusting elements as well as the design of a clear scale for the station selector. The required universal use demanded a compact design and solid manufacturing. The FM capacity was laid out to excel all comparable sets.

According to these these assumptions Rams produced a number of alternative designs (fig. 2). The set should preferrably be of compact and closed appearance; therefore, operating element and loudspeakers were first designed as a 'tower' (fig. 3). Rams planned to add a portable tv set, an innovative step in 1962/63 and - again - a consequent redevelopment of the system idea (fig. 4). Market ana!yses had shown that the construction of a portable had tobe dropped, one reason why the 'tower' arrangement of operating modul and loudspeakers had tobe abandoned, although preferred by Rams. This was done because the loudspeaker measurements were too !arge to warrant for excellent FM reception.

Dieter Rams expressed his dissatifaction about the "improvised" compilation of materials for the T 1000 housing. The wooden case was similar to those of traditional portables in the 50ies. The lateral meta! frames, the front meta! lid and the loudspeaker li ds are made of mat eloxy aluminium, top and lower parts are covered by black imitation leather. A supply company had difficulties to meet designers' demands for aluminium quality. The cooperation between designer, purchasing departments and supplier, often ignored, must be emphasied at this point.

D. Rams considers the front metal Lid very successful; the constructor H. Haupenberger (who is responsible for the T 1000) built a convincing detail which is used as a protection of the operating board, with the option for removal by means of a ball lock. The Inside contains product Informations (operating manual).

D. Rams ' main concern and ever recurring aim in designing has always been is to ensure a product's obvious quality. The graphics on the very large and clear scale - finish and fair copy by D. Lubs - emphasizes the all wave-band receiver and simplified station selection. Colour accents - the FM-push botton, the red mark on the selector switch, red scale graphics - explain the use for the FM reception.

The technically most striking feature of the T 1000 is the twelve-range drum tuner with it s gold contacts, which ensure top reliability for constant listening to a chosen station. The drum tuner must be tightly locked in its position. The selector should be tiltable and still easy to operate. Intense and cooperative discussions took place about questions on design, construction and technical manufacture resulting in an extremely functional and elegant appearance (fig. 5 und 6).

In the initial phase, the T 1000 was produced at a rate of 18 pieces per day with numerous quality checks. Marketing and sales were professionally organised and laid out for a certain consumer groups ( f i g. 7 und 8). The newcomer was demonstrated by specially trained Braun employees. The T 1000 was ordered e.g. by the federal press bureau to be used as presents for state visitors; embassies, consulates and press agencies purchased large quantities.

From 1964 onwards, the T 1000 could be supplemented by the PV 1000 (radar adapter), PK 1000 (radar ... ) and a radar compass for the use as navigation equipment ( fi g. 9, 10 und 11). The T 1000 CD did not only successfully "integrate all single aspects of a design solution to form a convincing unit", it also became the realisation of a leading technology by world standards: in its products category, the T 1000 set an intrinsic value standard.

Similar to the SK 4 the T 1000 (CD) is a significant set not only for the Braun collector, but also for collectors of industrial design. Braun's T 1000 CD is a must for all public design collections - its estimation is increasing all around the world. "Complete" sets including the PK 1000, the PV 1000, the radar compass and the log-book of 'museum' quality are particularly attractive. Well-designed displays, information und advertising material complete the T 1000 collection .