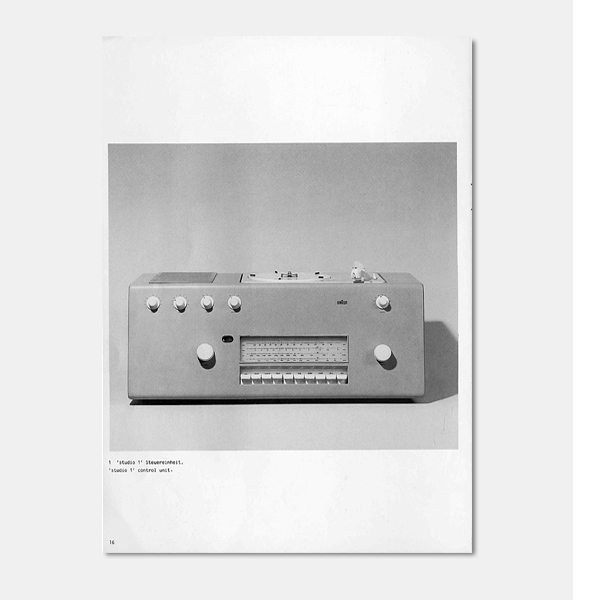 
"I have often wondered whether and to what extent modern tools and machines will one day be antiques. In my opinion this can be said about a number of our products, but not for the majority. In this respect I am naturally interested in the question of what are the criteria for an object to become a rarity after a few years" (Hans Gugelot, 1963)1).

'studio 1' (including the separate loudspeaker unit) designed by Hans Gugelot and Herbert Lindinger at the College of Art (HfG) in 1956/57, is such a rarity (fig. 1-5) 12). lt is based on significant design features: the exterior, new materials (e.g. polyester) as well as the separation of control unit and loudspeaker combination. The developing process of these design features, in context with the technical assumptions and the HfG design principles, are the major points of this article.

The 'studio 1' combination was specially designed by Dr. Lander and his team "to meet the highest demands of experts and music lovers" 2)3). Compared to competing radio sets, a high output capacity and first-rate high fidelity reproduction properties were required. The designers had to work with the predesigned radio chassis RC 62/5 including scale measurements, arrangement of keyboard, spaces for volume potentiometer and programme selection. Additionally, the PC 3 record player chassis including Wilhelm Wagenfeld's five-point piece had to be used. Therefore, Hans Gugelot and Herbert Lindinger could basically not define the radio set and its technical possibilities as an object of everyday use. Hans Gugelot's suggestion to integrate technical solutions and scientific know-how in the design process itself was not followed 4).

Gugelot: " ... in order to meet high standards I was then required to design a !arger model by use of the old chassis; not altogether an easy task, because one was not to recognize in the new model, which mainly consisted of the same chassis parts as the formerly more favourable unit 5).

Based on the SK 4 Hans Gugelot and Herbert Lindinger first designed a rectangular block within vertically supporting wooden frames and a record player on top. The operating elements have been arranged at the front side. This prototype looked massive - a slant at the front side made it appear a little 'slimmer', the handling was simplified (fig. 4). Because of the narrow upper part the record sticks ouf of the casing frame when being played. This was accepted by the designers, since the record player's function was not impaired (fig. 5).

The unit remained uncovered in accordance with the HfG principles. In further prototypes, designers integrated the supporting wooden parts by encircling metal sheet. Josef Schlecker (head of the HfG metal workshop) produced his first prototype as a casing of welded sheet-steel 16).

The asymmetrical arrangement of record player, scale and operating elements was determined by the inner technical structure. "Of course, the new set had to be laid out for a higher capacity thus requiring a !arger transformer, which could not be mounted on the old chassis because not enough space was provided, we placed a new chassis part next to the old one, thus producing an asymmetrical radio" (Hans Gugelot" 7).

Technicians feared a reduced input sensibility caused by the insulation of the ferrit antennae. They renounced metal sheets as the material for the casing. Both Dr. Lander, experienced in airplane constructions, and Hans Gugelot selected polyester for the casing (preformed, epoxy-impregnated and glued glass-fibre sheets). Hans Gugelot's philosophical concepts basically accepted the use of new materials provided they allowed a new variety of use and enhanced the value of the objects for industrial mass culture as a whole 8). Seats designed by Charles Eames in 1957 served as an example for the then rarely used material (fig. 6). As a rule, costs for tool making were also included into Hans Gugelots cost calculations during the design process. The reason for eventually selecting polyester is " ... because tools for other materials required in this small series can be ruled out" 9).

Aging properties of polyester precluded a white colouring. In the end, the 'studio 1' control unit got a gray coat of paint, an idea much favoured and supported by the head of product design Dr. Fritz Eichler - in 1957, this type of colouring was considered a risky undertaking since it could evoke negative associations with army equipment.

The designers developed the 'studio 1' control unit in a transitional situation. Developing times were short leaving very little breathing space. From today's point of view the limited experience with the new material is distinctly noticeable. The massive edges at the sides of the casing contradict the optimal manufacturing (fig. 4). The rounded rear of the casing's upper part with the ledge do not facilitate the separation of casing and frame. Hans Gugelot and Herbert Lindinger, together with Helmut Müller-Kühn, rapidly learned to master the material and used design possibiiities of the glass-fibre inforced polyester. This can be seen in the consequent and convincing use of the material in the influential interior design of Hamburg's underground (1959 -1962) (fig . 7)  8).

The development of the 'studio 1' control unit signifies Braun's newly introduced design principles in radio and phono manufacture started with the SK 1 (1955) and the SK 4 (1956). The designing of the 'studio 1' marks a distinct contrast to most of the wooden, veneered, highly polished, excessively decorated, gilded, over-sized loudspeakers produced by the end of the 1950 (fig. 9).

The control unit's scale was arranged in a graphic and well-ordered manner. Names of world-wide stations which could not be received anyhow are missing. The operating elements related to each other being arranged in order of their importance. The smaller operating elements were specially designed for the 'studio 1' by Hans Gugelot who followed his own design philosophy in "the characteristic forming of every single part according to its individual task" 10) (fig. 10). Therefore, the rear side was designed matter-of-factly, all graphic and non-graphic elements related to each other, the topographic variations were restricted to a minimum 11) (fig. 5).

The L 3 loudspeaker combination was formally not related to the control unit. lt was supposed to be integrated as unobtrusively as possible in the existing living room landscape typical for the end of the 1950s - a totally new approach which, compared to the hitherto valid principles of furniture manufacture had not been intended. Thus, the new prototype consisted of a !arge rectangular block (100 x 48,5 x 75,3) without particular attractiveness (fig. 12). In the second prototype Hans Gugelot mounted the four different dynamic high-tone loudspeakers with the glass-fibre membranes on top of the resonance-free silenced casing (fig. 13). They remained uncovered and visually emphasized all technical functions.

The time-consuming developing process required improvements regarding the reproduction quality as demanded by Dr. Lander. To achieve this, not only numerous technical tests were carried out, but also the Swiss Institute for Experimental Music headed by Hermann Scherchen was commissioned to work on the problem.

The innovative separation of functional parts, control unit and loudspeakers lead to the highest possible variety offering new approaches to the user, at the same time setting standards which are still valid today.

The combination 'studio 1' was introduced to the media in 1957, production and delivery started in 1958 (July 1, 1958; price DM 1,800.--; fig. 14)). Technical problems involving the shrinking of polyester casings produced by Messrs. Opelit (Offenbach) were responsible for the delay. The combination 'studio 1' was produced under severe quality checks in a small series of not more than 100 pieces.

Braun's marketing department stressed the exclusivity of the set in a special advertising campaign directed at "experts and music lovers" - thus aiming at new customer groups. The innovative use of the 'studio 1' was received with notable applause by the media - therefore, it was not surprising that the set was selected for the German pavillion on the 1958 Brussels World Exhibition (fig. 5).

The 'studio 1' combination ranges among the most rare Braun units because of extremely low production figures (approx. 200-250 pieces). In addition to this, it is especially valued by industrial design collectors who have increasingly noticed the influence and importance of the HfG. Therefore, Braun products, Braun advertising and information leaflets have become rare articles. Apart from the originally designed loudspeaker units there are no other units known to be in existence (see fig. 12).

The matter-of-fact HfG design "was supposed to be the special brand of an adequate relation to the industrial objects, a significant form in modern times, not only of modern styles, a brand distinctly contrasted against the normality in the consumer country" 12). This Hans Gugelot and Herbert Lindinger have achieved in the designing of the 'studio 1' combination.