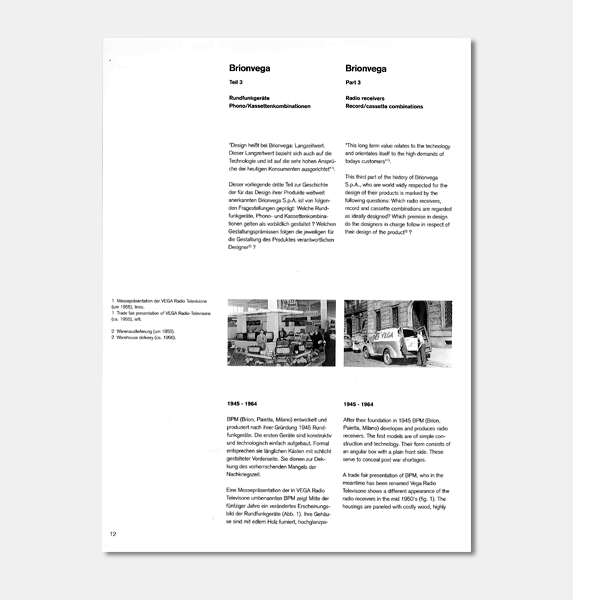 "This long term value relates to the technology and orientates itself to the high demands of todays customers" 1).

This third part of the history of Brionvega S.p.A., who are world widly respected for the design of their products is marked by the following questions: Which radio receivers, record and cassette combinations are regarded as ideally designed? Which premise in design do the designers in charge follow in respect of their design of the product 2)?

After their foundation in 1945 BPM (Brion, Paietta, Milano) developes and produces radio receivers. The first models are of simple construction and technology. Their form consists of an angular box with a plain front side. These serve to conceal post war shortages .

A trade fair presentation of BPM, who in the meantime has been renamed Vega Radio Televisone shows a different appearance of the radio receivers in the mid 1950's (fig. 1). The housings are paneled with costly wood, highly polished, with gold or creme colored inlays or edgings. Their value in use complies with the demands of the consumers for a repesentative environment. The housings of the cheap radio receivers are of a simpler style - they consist of light or light and dark color combinated plastic.

Towards the end of the 50's the demand for consumer electronic products increases - VEGA Radio Televisone expands 3). At the same time they expand their product advertising. The appearance of the company is matched to one image: stars, which associate to the Vega star system build the commercial reference (fig. 2 and 3).

The portable radio 'ts 502' is examplary for the designing of products by Marco Zanuso and Richard Sapper (fig. 4, 5 and 6). On this device they worked out, as on many of their other surprising developments, various forms of use. The 'ts 502' also convinces on account of an inventive idea: the smooth cube with the charming rounded edges can be opened. When dosed this device is an very attractive object of art, opened it turns into an optimally functional device for practical use 4). As in the

sets 'doney 14"' and 'algol' the Brionvega S.p.A. technicians concipated the electric circuits in transistor technology, which was innovative in 1964.

The internal placing of the circuits for both halfes of the cube is not identical, which demands an asymmetrical placing of the sinkable handle 5). The cearly ordered control and indication elements are located on the front bas-relief plate (fig.6). The various design awards and the permanent presence in the most important design museums of the world honours this well designed radio.

Hans Wichmann comments enthusiastically: if you compare this elegant device with those of other countries "you will note the flair of an independent, light, playful and yet increasingly cultivated seeming world, which always distinguishes the best ltalian designed objects" 6).

"Modern furniture became the norm in countless homes of the ltalian middle dass"  - this is how Penny Spark defines the needs of well to do Italien consumers who care for style 7). The 'modern' mass product styling of the Brionvega 'music-furniture' 'rr 124 fo-d' does not embody the aesthetic sense of the upper dass (fig. 7). Giuseppe Brion therefore gives Achille and Giacomo Castiglioni the task of developing a radio-phono-combination with an appearance that detracts itself from fixed formal ideas. Mobility and functionality - this is how Achille Castiglioni characterizes his designing aims (fig. 8 and 9) 8).

"The designers pay special attention to the best possible space saving placing of the loudspeakers. These can be attached to the sides, placed onto the asymmetrically integrated record player or placed at a remote distance to the set" (fig. 10) 9). The rollable steel console - the most remarkable design feature of the 'rr 126 fo/st' - ensures mobility. Achille and Pier Giacomo Castiglioni emphasize the constructive features of the console by means of a careful lining. The 'rr 126 fo/st' through its design features composes "a kind of lively paraphrase to the 'music-furniture', which was once so bourgeois" 10).

Easy handling linked with different forms of use are the design premises which Marco Zanuso realized with the 'ts 503' (fig. 11). The 'ts 503' can be used as a portable receiver as weil as a car radio. The housing moulds, which are slanted on both sides for the control elements, are a remarkable feature of the 'ts 503'. This solution in design prevents an accidental touching and thus activating of the control elements 11). The housing, built with accurately placed radiuses, is slighty slanted towards the base and the control field. The sinkable and fixable carrying handle enables a slanted positioning of the device when in mid positioning. The yellow control field and the handle form a visual accent of the 'ts 503'.

In 1967 Marco Zanuso developes the transistor radio 'rr 127', working on battery power supply (fig.12). The extraordinary large frequency markings on the scale are positioned horizontally as well as vertically. They draw attention to the different types of application: the soft yet edgy cube guarantees for firm hold in a horizontal or vertical position. The design with regard to graphics and colors (red, yellow) characterizes this model. With these elements of design Marco Zanuso creates an association to the creative field of pop art, which gains influence on design and room decoration. The control elements and the slits for the speaker are in a carefully chosen order to one another. The simple form of th is device and its control elements enable a rationalization and make mass production cheaper.

Achille and Pier Giacomo Castiglioni concipate the radio 'fd 1101 ' in 1967 (fig. 13) 12). The device enables a choice of six different radio channels. On account of a contemplated order of the inner components, the 'fd 1101' comes in a longish, flat form. lt may be posted horizontally or vertically.

The designers concipate the housing of colored, durable and scratch resistant plastic sides, which are pressed together. The 'fd 1101' shows how masterly the brothers Castiglioni know how to develop plastic housings, built to cover, secure and enhance the beauty of their devices 13).

According to Marco Zanuso this communication object should have a very technical appearance and at the same time be functional and minimized in its dimensions 14). For the housing the designers choose chrome-plated cast zama. The grating on the upper side of the housing stresses its regularity. The light and dark contrasts express the graphic appearance of this design object. The brand name Brionvega, remarkable in its size, is used as a further graphic element 15). The designers reduce the operation of the 'fd 1102' to very few control elements. Their different colored tops set visual accents. The 'fd 1102' can be placed on shelves or may be hung on or mounted into the wall 16).

Mario and Dario Bellini design the stereo combination 'totem rr 130' in 1970 (fig.14). "The system with its white or dark blue finished wooden cube (510x510x520H) seems when closed like minimal sculpture which hides something inside. The upper cube consists of two mobile loudspeakers, their black loudspeakers spacings were abstract and rhythmic accents" 17).

Extensive design studies with different sizes of cubes and variably openable cube parts dominate the design process of the 'totem rr 130' (fig. 16). In 1986 this object finds great acknowledgement at the exhibition 'Mario Bellini, Designer' of the MoMA in New York 18).

The 'soundbook' - a portable receiver with cassette recorder - is developed by Marco Zanuso and Richard Sapper in 1971 (fig.17) 19). This attractive and elegant plastic object again shows how this designer team is capable of developing goods for practical use in new forms with countless good ideas and on a high quality level. As with the 'ts 502' the cube with the rounded edges is openable. lts design is a metaphor of another information source: the opening of a book (soundbook) 20)21).

The designer colored the inside of the cube darker on purpose. Dirt and fingerprints, marks of intensive use, are scarcely noticeable.

In 1974 Marco Zanuso, Roberto Lucci and Paolo Orlandini design the 'Concetto 101': an extraordinary remarkable technical sculpture (fig.18) 22). The 'Concetto' combines the Dual turntable 1228 (Shure System N 75 D) with a hi-fi amplifier. The loudspeakers 'DA 101', which belong to the set, are to be placed separately 23).

The controversy between the front control panel and the organically formed openable cover of the turntable has a remarkable effect. The control panel is well organized bearing exactly inlet controls and narrow chrome plated sliding faders. The labelling has a puristical effect.

The axial bearing of the tone arm, the round of the turntable and the line of movement of the tone arm towards the center of the turntable are the relative factors for the design of the organically formed cover. This cover with its soft, flowing gradation reduces the overall height of this object. The 'Concetto' therefore seems light and elegant. The designers choose a high-gloss red as color for the inside of the top cover, purposely setting it against the mat black of the object itself 24).

Marco Zanuso and Richard Sapper change the 'ts 505' - a modified version of the 'ts 502' - to suit the requirements of mass production, which were required upto 1976 (fig. 19) 26). Now, for example, the production of the cover made of zama is too costly. A use of new materials is required. The designers vary the formal construction of the speaker covers on some prototypes in order to guarantee an optimal aesthetic integration to the outer appearance of the object (fig. 20). The designers also change the arrangement of the control and indicating elements on the 'ts 505'. Handling was facilitated by simplifying the control elements and making them self explanatory in their function and ergonomic views thus accounting for a new arrangement.

As many product designs by Marco Zanuso and Richard Sapper, the 'ts 505' with its formal and timeless perfection integrates with any living room atmosphere (fig.19) 27).

With the stereo tuner 'TSX 1000/ 1' and the hi-fi amplifier 'AX 3500' Mario Bellini varies the form language for hi-fi appliances, which existes upto to the beginning of the 1980's (fig. 21 and 22) 28). The controls are easy to use and are placed in an ordered relationship to one another. Mario Bellini succeeds in reduction of formal variaty. The professional technology of the 'AX 3500' hi-fi amplifier is underlined by the designer through the very technical seeming curved route of the bass and treble regulators.

On their presentation at the SIM in Milano the design and the form convinces the experts. A special prize is also awarded 29).

In 1994 Brionvega S.p.A. only produces apart from the 'ts 505' audio-visual devices. The architect and designer Mario Bellini confirms: "Electronics have eliminated any possibility of understanding the process through which the objects exist and function. The once apparent reason for a specific form of an object is now not valid " 30). Innovative design solutions are required - an ideal job for Brionvega S.p.A.!