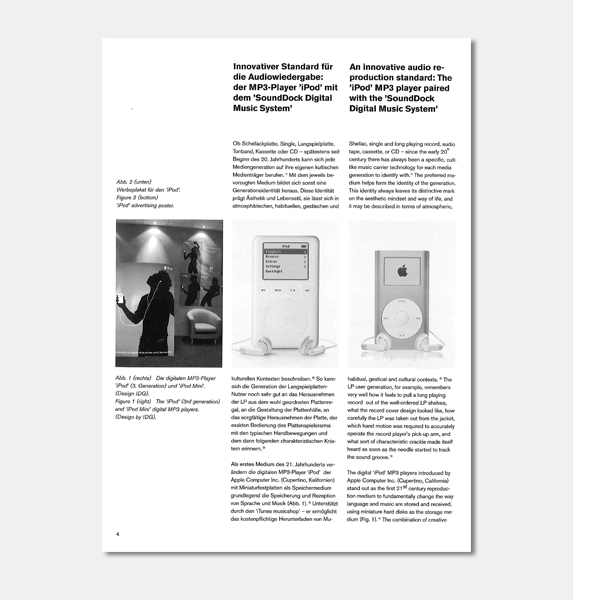 
Shellac, single and long playing record, audio tape, cassette, or CD – since the early 20th century there has always been a specific, cult-like music carrier technology for each media generation to identify with.1) The preferred medium helps form the identity of the generation. This identity always leaves its distinctive mark on the aesthetic mindset and way of life, and it may be described in terms of atmospheric, habitual, gestical and cultural contexts. 2) The LP user generation, for example, remembers very well how it feels to pull a long playing record out of the well-ordered LP shelves, what the record cover design looked like, how carefully the LP was taken out from the jacket, which hand motion was required to accurately operate the record player's pick-up arm, and what sort of characteristic crackle made itself heard as soon as the needle started to track the sound groove. 3) The digital 'iPod' MP3 players introduced by Apple Computer Inc. (Cupertino, California) stand out as the first 21st century reproduction medium to fundamentally change the way language and music are stored and received, using miniature hard disks as the storage medium (Fig. 1). 4) The combination of creative advertising, the 'iTunes Music Store' offering pay download of tracks from the internet, and elegantly designed accessories catapulted these devices into cult status within not more than two years (Fig. 2). 5)

The sleek 'SoundDock' digital music system launched by the Bose Corporation (Framingham, Massachusetts) enables clear and brillant reproduction of 'iPod'-stored speech or music – a typical Bose product in that it sets a new standard for audio reproduction from this type of MP3 players (Fig. 3 ). 6) 7) 8) 9)

Characteristic features of the 'iPod' design

With determination and perseverance, Apple Computer Inc. CEO Steve Jobs pursues his 'Digital Hub' vision – the digital integration of computer, MP3 player, DVD player, webcam or digicam into one network. 10) This strategy-oriented company philosophy is the basis for the IDG internal design group headed by Jonathan Ive to develop a holistic design approach matching Apple's graphic appearance. 11) Much like Dieter Rams in his works for Braun AG or Vitsoe, Jonathan Ive shows a good feel for simplicity, sensitivity, and power of judgement whenever he designs homogeneous, well-shaped product lines.
The design of each single 'iPod' generation is determined by simple basic geometric shapes (Fig. 1). 12) The first 'iPod' generation (launched on 23 October 2001) is characterized by distinctly rounded corners and the thoughtfully located 'Scroll Wheel' with few controls. The polished stainless steel back and the white polyamide front create a high-value impression. The third generation of the 'iPod' (launched on 28 April 2003) designed by the IDG team was slimmer due to the use of a touch-senstitive 'Touch Wheel'. The 'iPod Mini' (launched on 6 January 2004) allows even more intuitive operation owing to a newly-developed 'Click Wheel' combined with appropriate controls. In every iPod model, the chosen material, the homogeneous arrangement of the individual components, and the practical operability put the stress on the Apple design's cross-cultural character that appears to stand for timeless value.

It was the users' wish for mobility in order to put together their own personal music programs for parties and venues that enabled the introduction in 1961 of the 'PCV 4' portable stereo manufactured by Braun AG (Fig. 4). 13 ) Dieter Rams designed the compact device (400x200x260mm) for robust use. The wooden casing was lined with a rugged coating of graphite-coloured plastic fabric. The two loudspeaker boxes provide a stereo sound that is surprisingly good in relation to the listening habits of the time, and serve a second function as the removable of the portable device. The simple white pick-up arm with its design suited to the material involved, the precisely arranged control elements, and the harmoniously proportioned grooves make this stereo system an example of the order and harmony so typical of the design by Dieter Rams. The 'PCV 4' evolved into a cult device in the course of the sixties, establishing a new utility value standard for portable audio in 1961.

The shape of the 'SoundDock' designed by Rich Carbone (Lead Designer) and Gustavo Fontana (Industrial Designer) consciously adopts essential 'iPod' design features in order to merge these two devices such as to form one harmonious unity. 14) 15) Furthermore, the 'SoundDock' is governed by the Bose design philosophy known for elegant, though unobtrusive, design, a shape reduced to the essential and as compact as possible, and extreme user-friendliness.

The very first drafts for the 'SoundDock' show the 'iPod' in a centered position within the casing (Fig. 5). It is during this stage of the process that the designers, who closely cooperate with the acoustic engineer Jim Wagner, came to recognize that both the shape and the size of the 'SoundDock' tightly correspond with the acoustic volume required to achieve the desired brilliant and powerful sound. 16) The only way to reconcile such an acoustic volume with maximum compactness of the unit is a so-called 'slot-port' enclosure optimized for maximum bass output. That's why in the second draft the 'iPod' is located outside the enclosure (Figure 6). The first prototype already shows the dominant 'SoundDock' design features: the polished and bright white Lexan Polycarbonate enclosure and the elegantly curved, silvery speaker front (Fig. 7).

The final shape of the 'SoundDock' (Fig. 3) is a result of further extensive laboratory testing as to how the acoustic features can be optimized. The speakers with their built-in high-performance drivers are located on the right and left side. They are angled outwards by about 10 degrees each in order to enhance stereo separation. This is the reason for the elegant curvature of the front. 17) This is a typical design feature common to most Bose devices such as, for example, the Bose '901' speakers, the 'Wave Radios', the recently launched 'Lifestyle Media Center', the '3.2.1 Media Center' or the 'Gemestone Speaker Arrays'. 18)

Air flow turbulence deteriorating the sound quality is prevented by the port design of the speakers, and by the shape and out-of-line arrangement of the front grille perforations. 19) The SoundDock's compact size (16.89 x 30.26 x 16.47 cm) with its slim and staggered rear side was only achievable for the designers because the Bose engineers used patent technologies to exactly tune the amplifier, equalizer, and the speakers to match each other. 20) The docking station for the 'iPod' and the 'SoundDock' enclosure are connected by four elastic clips. This noise decoupling measure prevents potential troublesome vibrations on the surface where the system is placed.

The unobtrusive design of the 'SoundDock' borrows its valueness from the carefully proportioned radii, the elegant front and the high-quality finish. No matter which 'iPod' model is docked in the docking station – due to its design features it is always in harmony with the 'SoundDock' – the two devices form one unity. The silver speaker grill contributes its share in that it provides a contrasty background. All in all, the unmistakable design of the 'SoundDock Digital Music Systems' is a visual equivalent of the system's outstanding technological features. There is no limit as to where you can place it, and its elegant appearance fits into any environment.

How to install and operate the 'SoundDock'

The 'SoundDock' is very easy to install and to operate. Before using the system for the first time, the appropriate insert for the various iPod models is installed in the dock until it rests in place on top of the docking station. 21) A second volume control is provided by buttons placed on both sides of the docking station. The 'iPod' navigation keys are fully functional while it is in the docking cradle. Whenever the iPod is docked in the system the 'SoundDock' recharges the lithium-ion batteries.

The 'iPod' is controlled by the infrared remote control (Figure 8). 22)) 23) The rounded edges of this remote control, which is not bigger than a credit card, ensures a comfortable grip. Intuitive operation is supported by the set of operating functions being limited to only a few buttons, the slightly domed keys, and the thoughtful keyboard arrangement. They are one more feature of this user-friendly system.