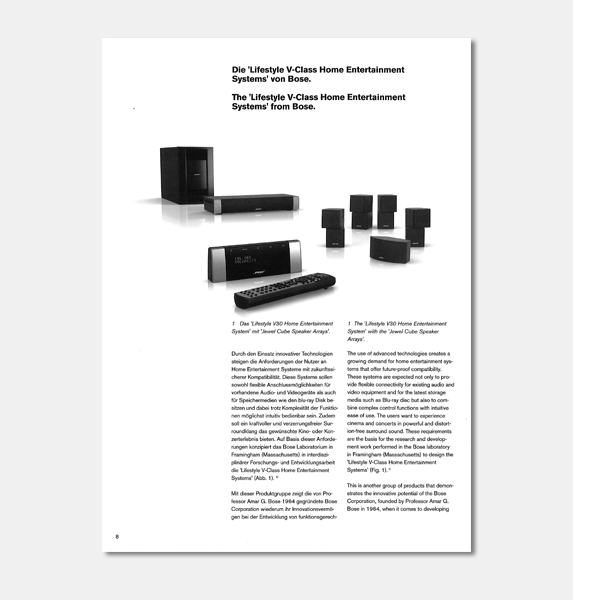 
The use of advanced technologies creates a growing demand for home entertainment systems that offer future-proof compatibility. These systems are expected not only to provide flexible connectivity for existing audio and video equipment and for the latest storage media such as HD-DVD or Blu-ray but also to combine complex control functions with intuitive ease of use. The users want to experience cinema and concerts in powerful and distortion-free surround sound. These requirements are the basis for the research and development work performed in the Bose laboratory in Framingham (Massachusetts) to design the 'Lifestyle V-Class Home Entertainment Systems' (Fig. 1). 1)

This is another group of products that demonstrates the innovative potential of the Bose Corporation, founded by Professor Amar G. Bose in 1964, when it comes to developing functional, elegant and easy-to-operate audio-visual devices that deliver realistic sound. 2) The 'Lifestyle V-Class Home Entertainment Systems' add future-proof compatibility to the 'Lifestyle DVD Entertainment Systems' with the Media Center integrated into the DVD player (Fig. 2). 3)

The following article is to explain the development goals of the 'Lifestyle V-Class Home Entertainment Systems' components and how these goals were achieved and to analyze their design style within the context of the process that this design has resulted from.

The project definition states that the 'Lifestyle V-Class Home Entertainment System' shall have a stand-alone appearance but must not relinquish Bose's basic design principles such as elegant styling, ultimate ease of use and a design reduced to the essentials. 4) The initial concepts show a system component with an integrated display (Fig. 3). The necessary dissipation of the heat emanating from the electronic circuits is ensured by a top surface made of brushed aluminum (Fig. 4). Subsequent drafts show that the designers reduce the volume and give a lower and more rectangular shape to the console, integrating the display into the front together with the user controls (Fig. 5). Finally, the designers conceive two system components that provide the user with the benefit of being able to integrate the Lifestyle System display into any décor and to hide the media console out of sight in a closet. 5)

The idea shown in initial drafts was to house the system display in an aluminum enclosure with a very narrow front profile and the user controls or displays placed on the top (Fig. 6). The designers try to achieve the level of stability required for such a narrow front profile by introducing stabilizing aluminum strips. There are also various ideas regarding the cable connections between the system display and the media console (Fig. 7).

The front face is dominated by the large display window built harmoniously into the front of what is a convincing formal design of the 'Lifestyle System Display' resulting from a long development process (Fig. 8). The vacuum-fluorescent display (VFD) is easy to read even under bright ambient light conditions. The slim, conical shape of the 'Lifestyle System Display' was reduced in volume (21.9 x 7.6 x 5.7cm) and features dynamic linework and a 3 mm high recessed base. The black, high-gloss display window is framed flush in silver facings made from alongside-brushed aluminum. The wide buttons of the control panel on the top side have been carefully integrated into the design and enable the user to control the basic functions of the system. The buttons are precisely modeled and slightly arched, with exact edge contours and well-defined gaps between them. It is this design quality that was acknowledged, among others, by the 2008 'reddot design award best of the best'. 6)

Developing the media console turned out to be a time-consuming and complicated task for the design and product development team. The console accommodates the key elements of the sophisticated electronic circuitry required for features such as video enhancing, Integrated Signal Processing or for optimizing the signals of certain video sources. 7)

Dissipating the heat generated by the electronic components would have been an easy task if the designers had chosen a horizontal console structure with as wide a front as possible. The vertical setup that the teams opted for, however, allows for easier accommodation of the media console and for using it as a base on which to place other audiovisual devices. In close cooperation with the product developing team, the designers reduced the size of the console to a minimum (44 x 6.8 x 19.1 cm). Effective heat dissipation is now ensured by covering the console top side with a metal cap made of cast magnesium that was the result of comprehensive testing.

The sides of the slightly curved front with its distinctive narrow profile are framed by silver accentuations (Fig.9). The goal was to make the console (which can also be hidden out of sight, by the way) esthetically more similar to the 'Lifestyle System Display' – this is why the 'Lifestyle V-Class Home Entertainment Systems' are perceived as one formal unit in spite of the different designs of the individual system components. 8)

The input/output panel at the rear of the console was designed with particular care (Fig. 9). 9) The designers combined the connections into clearly arranged groups and unmistakably marked them with colors and by graphic means. This supports the smooth and error-free installation of the individual connections and contributes to the system's high level of functionality.

The complexity of the control functions is mapped on the limited surface of a remote control. As Mike Laude states, the goal of the Bose design team was to translate the variety of control functions of the 'Lifestyle V-Class Home Entertainment Systems' into an understandable arrangement in both haptic and visual terms and, at the same time, to ensure that this remote control can operate the basic functions of the connected audio and video sources. 13)

The radio-frequency remote of the 'Lifestyle V-Class Home Entertainment Systems' has rounded edges with smooth radii, a slightly arched user interface and a flat inserted panel made of satin-brushed aluminum (Fig. 11). It is easy to pick up and operate for right- and left-handed users. The dominant feature of the remote control's elegant shape is the arrangement of the user controls neatly grouped into control panels. The designers decided to place the operating and source buttons in the upper control panel with the accentuated TV button in the middle. The contoured arrow keys and the deliberately lowered enter button are used to select the menu objects. The rocker switches for volume control and channel selection are concavely curved. The designers consistently pay attention to every detail, as can be seen from the horizontal separator of the volume button or from the fact that the designers deliberately gave a narrower shape to the SCAN button than to the pause, stop or play buttons. This button design enables the user to keep in mind the user interface and to orient himself or herself merely based on his or her tactile memory. The desired intuitive ease of use is further enhanced by clear designations and visually distinctive icons instead of incomprehensible acronyms.

The design team developed various formal shapes for the buttons. It was only after a number of prototypes that they successfully optimized the buttons and their size in tactile terms and found out how wide the gaps between the buttons must be in order to enable error-free operation (Fig. 12). 14)

The detailed design of the remote control shows the user-oriented approach of the Bose design team led by Mike Laude and makes obvious how systematically the Bose design principles - elegant design combined with forms reduced to the essentials - have been implemented in developing the 'Lifestyle V-Class Home Entertainment Systems'.