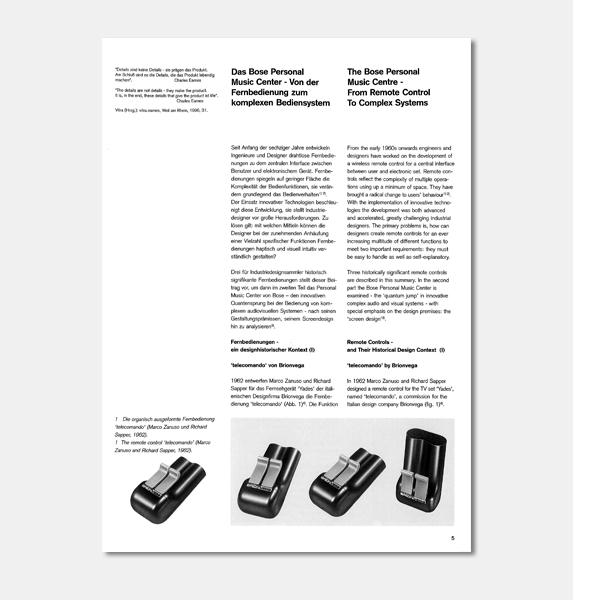 
From the early 1960s onwards engineers and designers have worked on the development of a wireless remote control for a central interface between user and electronic set. Remote controls reflect the complexity of multiple operations using up a minimum of space. They have brought a radical change to users' behaviour 1)2). With the implementation of innovative technologies the development was both advanced and accelerated, greatly challenging industrial designers. The primary problems is, how can designers create remote controls for an ever increasing multitude of different functions to meet two important requirements: they must be easy to handle as well as self-explanatory.

Three historically significant remote controls are described in this summary. In the second part the Bose Personal Music Center is examined - the 'quantum jump' in innovative complex audio and visual systems - with special emphasis on the design premises: the 'screen design'.

Remote Controls and Their Historical Design Context (I)

In 1962 Marco Zanuso and Richard Sapper designed a remote control for the TV set 'Yades', named 'telecomando', a commission for the Italian design company Brionvega (fig. 1) 4). Based on sonographic technology, the 'telecomando' was designed with a view to invite the user to touch as well as to stress the utility of the object, lovingly shaped by Marco Zanuso. Two large red keys drew attention to the most important functions. According to Zanuso the colour had been chosen for a better contrast to the otherwise black plastic housing to enable easy recovery of the object in the event of it being misplaced 5).

Mario and Dario Bellini have been designing remote controls for Brionvega from 1984 to 1994. Form, colour, symbols and structure of the functional keys received their finishing touch only after completion of long, systematic test series (fig 2) 6). The keys were arranged in groups. Controls for the power switch and the volume are within reach of the thumb. Due to a small additional enforcement underneath, the remote control is slightly tilted on an even surface and can therefore be easily retrieved. Graphics and symbols are covered by a thin scratch-resistant film for protection against wear and tear. Especially the remote control TLC 252 for the TV set 'Quadro' by Mario and Dario Bellini has received a most convincing design (fig. 3).

In 1986 Peter Hartwein and Dieter Rams designed the RC 1 remote control for the Braun 'atelier' system (fig. 4) 8), the embodiment of Braun's consequently purist standards. Most significant here are such excellent details as the space between horizontal grooves of the pre-selector, the shape and the design graphics on the surface 9). All superfluous elements have been eliminated, there are two different functional levels. The upper 'pre-selector' serves to control the set chosen - which is indicated on the oval display. The frequently used adjustment keys and the power key have been arranged on the lower segment of the device 10). By touching the locking spring the 'second level' is accessible where more specialised functional keys can be found (fig. 5). With the RC 1 Dieter Rams and Peter Hartwein set new standards in hardware design and anticipated the current interface design with central control.

The Personal Music Centre by Bose - The Future of Control

The Personal Music Centre Lifestyle 40 Music System or Lifestyle 50 Digital Audio Home Entertainment System by Bose must be described as one step ahead of the future. It represents an essentially progressive milestone in the handling of audio-visual systems - it definitely sets a new utility standard (fig. 6 and 7) 11)12)13). The Personal Music Centre (PMC) is the result of long-term interdisciplinary, complex and innovative research carried out by Bose Corporation in Framingham, Massachusetts. As early as 1964 Bose started out to develop uncompromising top-quality and important innovations in the audio field 14).

The basic principles of the PMC were first outlined by John Grinkus in close cooperation with Dr. Amar G. Bose 15)16). Their far-reaching aim: the concept of an avant-garde combination of remote control, display and control computer. All this was to be housed in the smallest possible form, combining an intuitive control concept and an elegant formal shape. In short: the essence of audio technology.

The Shape of the Personal Music Centre

As a first step all PMC technological function underwent extensive testing. Then John Grinkus and Kevin Annunziato began a time consuming and sometimes laborious process to arrange the individual system components in order to achieve a form of extremely compact proportions 17). When integrating the radio frequency module, the team was facing several problems since all components needed to be arranged according to mechanical criteria, and this hampered the desired frequency range 18). A compromise between module packaging and frequency range had to be found.

First design sketches show a formal similarity to the elegantly proportioned shape of the Lifestyle Music systems (fig. 8) 19). The oval form of the PMC was decided upon to meet the criteria set up for the using of the display.

The first prototypes resembled the Lifestyle Centre, they were made of aluminium with a brushed metal surface (fig. 9) 20). However, these prototypes did not meet the required norms of good readability. Added to this, the contrast between oval shape and display was found to be insufficient. The PMC was too smooth and too cold to the touch - another disfavourable point. For these reasons, the Bose team adopted a darker colour for the housing with slim accurately proportioned edges. A special 'soft touch' paint lent a comfortable visual ease to the housing surface.

Mike Laude, Bose Design Centre director, voiced his satisfaction about the subtle treatment of the Bose label: "We recessed the three-dimensional metal badge in the lower housing oval so that it does not present any uncomfortable edges to the user" 21). Even if left on the table the remote control ensures perfect function. By integrating all of the controls and a display into a wireless hand held unit, users have full control over all zones of the system and know exactly what the system is doing no matter where they are in their home.

With its slim and simple oval shape the Personal Music Centre fits perfectly in the elegant Lifestyle family. It is considered the epitome of the current design trend where consequent use of micro-electronics in electronic objects produce extremely reduced and miniaturized results 22).

In early prototypes the core controls (e.g. power, volume) were arranged outside the display in the oval edges of the PMC (fig. 10). After intensive discussions, however, the team decided to transfer all control functions directly to the display.

In a first step Alan Schell and James McElroy (interface designers) determined the different menus and keys for the control functions on the display (fig. 11). The so-called 'core' controls (power, sleep, mute, volume, menu) are located along the outer edges of the sides of the controller where they are most easily reached 23). Current sources are clearly indicated in large text at the top of the display. Controls for the source are located directly below in the middle of the screen. Set-up features and advanced controls are accessible from menus at the touch of a button, but do not clutter the screen unless requested. Numeric keypads provide direct access to radio stations, pre-sets, discs and tracks. Clear commands have been chosen in preference to confusing abbreviations, thus facilitating readability. Icons add to the better understanding of text information.

First testing of the screen design was carried out with various users. A number of unsatisfactory details occurred: too many information choices cluttered the 'option' segment, a maze of dark indicators dominated the screen, and there were several insufficiently marked keypads. In a second step the designers optimized the handling and readability as well as fingerprint and surface resistance (fig. 12) 24).

Surfaces and icons become more and more important for the intuitive use of electronic products. The screen design introduced by Bose is convincing because of its inimitable graphics and easy handling. It sets a world-wide standard for the function and control of audio-visual systems.

Remote controls that are attractive to collectors of industrial design are particularly interesting objects because they unite top current technological products and the most differing design philosophies. They are attractive (and space-saving) objects for collectors of, as yet unknown, design gems. Added to this, remote controls are inexpensive compared to design classics such as the Braun T 1000 or the televisore black by Brionvega. The innovative Personal Music Centre for the Lifestyle 40 or Lifestyle 50 systems will be hard to miss in museum industrial design departments because of the successful symbiosis of technology and design. They are commonly attractive to buy for both technology and design fans.