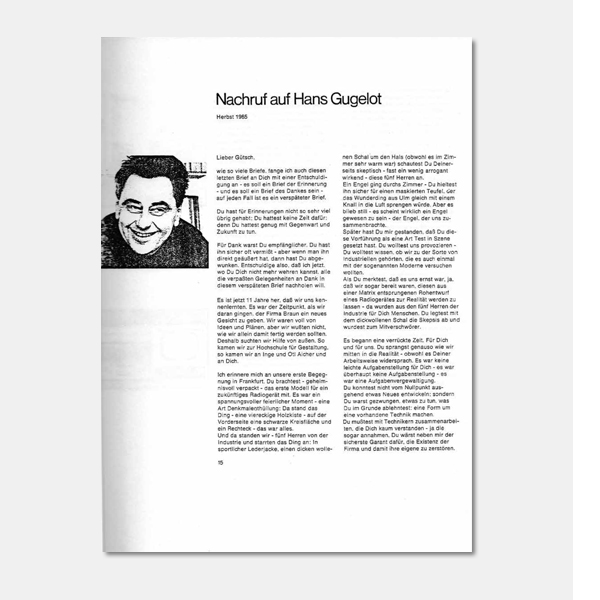 Like so many letters, I start out this last letter to you with an apology. It is supposed to be a letter of memory – and a letter of thanks; in any event, it is a late letter.

You never were too fond of memories: You didn't have time for them: because you were busy enough with the present and the future.

Of thanks you were more appreciative. You must have surely missed it quite often – but if someone expressed it directly, you just shrugged it off. So please apologize that I want to make up for all the missed opportunities for thanks in this late letter now that you can't defend yourself anymore.

I still remember how we first met in Frankfurt. You brought along – mystically packed – the first model of a future radio set. It was a festive moment full of suspense – like uncovering a monument: There was the thing – a square wooden box – a black circle and a rectangle on the front – that was all.

And there was us – five men from the industry – staring at the thing: Wearing a sporty leather jacket, a thick woolen scarf around your neck (although it was very warm inside the room) you were skeptically – with almost a slightly arrogant expression – looking at these five men.

An angel walked across the room – you must surely have thought that it was a devil in disguise who would blow up this marvelous thing from Ulm with a bang. But it remained silent – it seems as if it really was an angel – the angel who brought us together.

Later, you admitted that you had staged this presentation as kind of a test. You wanted to provoke us – you wanted to know whether we were this sort of industrialists who wanted to give so-called modernity a try.

When you realized that we were serious about it, that we were even ready to turn this rough draft of a radio set originating from a matrix into reality – at that point the five men of the industry turned into human beings for you. Together with the thick woolen scarf you put down your skepticism and became a co-conspirator.

It was the beginning of a crazy time. For you and for us. You jumped, just like we did, right into reality – although it was contradictory to how you used to work. It was no easy task for you – actually it was not a task – it was the violation of a task.

You could not develop something new from scratch; but you were forced to do something you actually rejected: creating a shape around existing technology.

You had to work with engineers who were hardly able to understand you – who actually thought that you, after myself, were the safest guarantor for ruining the company's and, thus, their own existence.

And behind everything was the pressure of time. Three quarters of a year were left until the entire radio-phono-television program was to show its new face at the Electronic Exhibition in Düsseldorf. We worked at two sites simultaneously – you in Ulm – we in Frankfurt. One day, the radio-phono combination 'PKG-G' – "der lange Heinrich" (the tall Henry) – was finished. Soon after, a new Tischsuper in two versions – a record player and a television. With these devices you had succeeded in developing devices from a wrong starting point so to speak, devices that were consistent regarding their dimensions and shapes, that could be placed next or on top of each other; they were the first combinable devices available on the market – they were true Gugelots. Next to them, ours looked naive, well-behaved, and old-fashioned.

I remember a discussion about the chances of success and the future prospects of these devices. The men who were so very experienced could not imagine that your provocative creations would reach an age for which it was even worth being born at all. The more conventional shapes represented something like a "solid compromise" seemed more promising. I had a different opinion (and was even ready to bet).

I was – thank goodness – right after all. Conventional devices disappeared from the market after 2-3 years – yours gained value with years – they were characterized by a level of durability that was astonishing for radio sets. That was pleasing – but with restrictions. Because just like you had been forced to create an outside shape around existing inside technology, we were now forced to build new technology into an existing shape – a vicious circle. There is no better proof for your point of view you took from the beginning – technology and shape need to develop together organically based on the task – the exterior is the final product.

The success that your and our endeavors showed is nothing new. It gave you as well as us a great boost.

The cooperation developed into friendship – a friendship, as some people thought, of fools. Maybe we really were out of our minds. Surely not in the usual – but rather in a literal sense: a little bit out of the usual ways of thinking – that little bit that is necessary to look at things from a distance – that little bit that makes it possible to ask "why" even about seemingly self-evident circumstances. And you truly were a master in asking "why".

I have learned a lot from you. When we met, I thought that I knew quite a lot, but then I realized how fragmentary and incoherent my knowledge was. You were a generous and patient teacher and you would not let your students feel that you were the giver.

I remember the birth of the 'SK 4', the device that became probably most representative of the Braun design. It was a difficult birth. Mr. Rams and I had gotten on the wrong track. The top arrangement of record player and control elements was clear. It already looked like it still does today. But we did not come to terms with the decisive part – the construction of the enclosure. We were experimenting with a wooden enclosure in different versions. We just made no progress. I visited you in Ulm. You put on your melancholic, thoughtful face and promised to think about it. Merely a few days later did you arrive with a complete model: a white, u-shaped sheet metal enclosure clamped between two wooden side plates – a solution so self-evidently simple that one could become jealous. No one had dared to build a radio enclosure out of sheet metal so far. The engineers moaned but they saw the necessity.

Later, the plexiglass cover was added. Snow White had been born.

All the devices you designed for us were a decisive, real starting point for our development – for everything that achieved success and appreciation under the slightly questionable term of "Braun style".

But I think that, as decisive as many of your – and Otl Aicher's – suggestions were, your criticism and the working methods you taught us were almost as decisive – they constitute the basso continuo for our past, present, and future work.

The question "what does Gütsch think about it" always was a decisive measure for me – and it always will be.

Be as always heartily embraced in friendship by your Fritz.