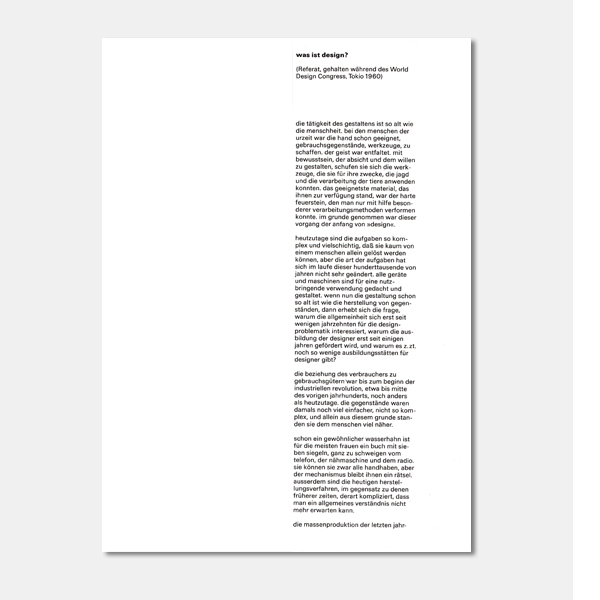 
(Presentation, given during the World Design Congress, Tokyo 1960)

the activity of designing is as old as mankind. for the people of prehistoric times, the hand was already capable of creating objects of utility, tools. the intellect was unfolded. with a foreseeing conscience and the will to create, they made the tools they could use for their purposes, for hunting and processing the prey. the most suitable material available to them was hard flint, which could only be hewn with the help of special processing methods. basically, this process was the beginning of "design".

today, the tasks are so complex and multifaceted that they can hardly be solved by one person alone, but the nature of the tasks has not changed much over the course of these hundreds of thousands of years. all appliances and machines are designed and built for a useful purpose. if design is as old as the manufacture of objects, then the question arises why the general public has only been interested in design for a few decades, why the education of designers has only been promoted for a few years, and why there are still so few educational institutions for designers at present?

up until the beginning of the industrial revolution, around the middle of the last century, the consumer's relationship with consumer goods was still different than it is today. back then, objects were much simpler, less complex, and for this reason alone, they were much closer to the people.

for most women, even an ordinary tap is a mystery, not to mention the telephone, sewing machine and radio. they can handle them all, but the mechanism remains a mystery to them. furthermore, today's manufacturing processes, unlike those of earlier times, are so complicated that one can no longer expect a general understanding.

mass production of the last decades has necessarily and inevitably led to an increase in sales. i am not a market economist, but i think i can say that our production methods are very inflexible, i.e. they can hardly be adapted to another product in a short period of time, and, above all, their capacity cannot be changed so quickly and without serious consequences. demand can change much faster, so that in our free market economy, production can hardly be based on natural need and demand. however, one will try to control need and demand.

the production process can be compared to radiant heating. in the event of a sudden cold snap, it takes many hours for the ceiling to heat up. if the outside temperature rises again very quickly, there is too much heat, because the ceiling continues to radiate heat for many hours. the residents have no choice but to open the windows. the ceiling continues to heat until the inside and outside temperatures are balanced. similar conditions can be found in the relationship between mass production and sales, that is, at least as long as you are prepared to open the windows in case of excessive heat. there are several possibilities to control production and sales. to stick to the above-mentioned example: you could for instance convince the residents that they need more heat. but for this, market economists need advertising experts and also designers. it is then the task of the designers to make sure that the consumer does not get too hot.

i have oversimplified the game of supply and demand here, and i don't want to comment on this any further; i just want to show that i am quite clear about the relation between market conditions and the professional development of the industrial designer. generally speaking, the manufacturer - apart from some idealistically minded manufacturers - regards "design" as a sales-promoting element.

the designer can actually be quite indifferent to what is the argument for collaborating with the manufacturer, especially if he manages to get involved at an early stage of the product planning process. i think this is where the designer has a real chance to leverage his skills. product planning doesn't just refer to which specific product should be made, but also to how the product should be designed, how it works and how it can be integrated into the human environment. i consider this to be a kind of coordinating activity, which should lead through a preliminary study to the basic conditions of a task, which in turn is a guide for the engineering team. to put it even more clearly: one could specify the activity with a slogan: the task of the designer should be to design good consumer goods that can be produced, instead of designing good production goods that have to be consumed.

the difference between a designer and an engineer is basically nothing more than a technical distinction between specialists such as production engineers, constructing engineers and physicists. the designer is a constructing engineer who considers people as part of a system. in the arts and crafts business, this aspect can rather be neglected, because the product gets the final fashionable look by stylistic means. this is the threat of today's popularization of design. and we are all largely exposed to this threat, i.e. if we first and foremost and at all costs submit our work only to the aspect of sales promotion. Especially so if the name of a designer has become so popular that the quality of a product becomes irrelevant, that the name of the designer alone is enough to sell this product.

the industrial designer's contribution will be to increase the practical value of an article. due to his coordinating activity, his design-engineering ability and his specialization in human-machine relations, he is the only one in the whole team who determines the final structure of the product. whether the designer is working on a sewing machine, a measuring device or a camera, he always looks at the device or machine in conjunction with the human being. the sewing machine and the seamstress are both parts of a control loop. in this system, the human being is a constant, but its specific characteristics are not constant and that makes planning difficult. the human being is not very standardized, it has a limited range and a slow reaction time. it is very imprecise, and in the end, all these characteristics have to be considered as constants in the design of an object. men's movement is only limited by his muscles and joints. but still, you have to expect deviations of up to 30%.

i do not necessarily support the theory that design activity cannot also serve to promote sales. this inevitably results from the dual task of a designer.

if, however, the object designed by a designer is to be integrated into the human environment, another factor must be taken into account: the human environment is made up of objects. every newly created object enters into a certain relationship with this environment and becomes part of it. this fact leads to a number of insights for design activity, which, in my opinion, have not yet been sufficiently taken into account to date. up until industrialization, we did not have any specific problems in this regard. on the one hand, the production possibilities were very limited, on the other hand, the manufacturers worked more anonymously and had no particular ambition to regard their creative work as their own personal achievement. thus, at a certain point in time, construction methods and the will to design were quite balanced.

this claim can be historically proven. it is probably widely known that painters did not see their work as a piece of art, but rather as mere craftsmanship. similarly, this also applied to the building trade: the construction period was so long that several generations worked on one building until its completion. the quality of the work was therefore much more consistent over long periods of time than today.

relationships that a human being finds in its environment are also relationships between objects. they include standardization, fits, modular systems, device complexes and last but not least the neighbor relationship between products and appliances. these relationships occur when two objects are brought together in a room that can easily be overlooked. this relationship does not necessarily have to be functional, but can also be purely formal, e.g. when furniture of different origins is placed in a room, it enters into a formal relationship. this phenomenon can also occur in urban planning etc.

the more new materials are developed and the more complicated therefore e.g. the structure of the environment becomes, the greater the responsibility of the designer. in this context the job of the designer can be compared to that of the urban planner, whose job originally developed from the profession of the architect.

considering all the aspects mentioned so far, it is very difficult to give a more precise definition of a designer's job. but after many years of practical work and experience in the field of industrial design, we have found a wording in ulm that may help to clarify the job description of a designer:
industrial design is the design of industrial products. the designer must have the knowledge, skills and experience to grasp the product-determining factors, develop the design concept and realize that concept in cooperation with those involved in product planning, development and production right up to the finished product. the findings of science and technology serve as the basis for his coordinating design activity. the aim of his work is to create industrial products that serve society in cultural and social respects.