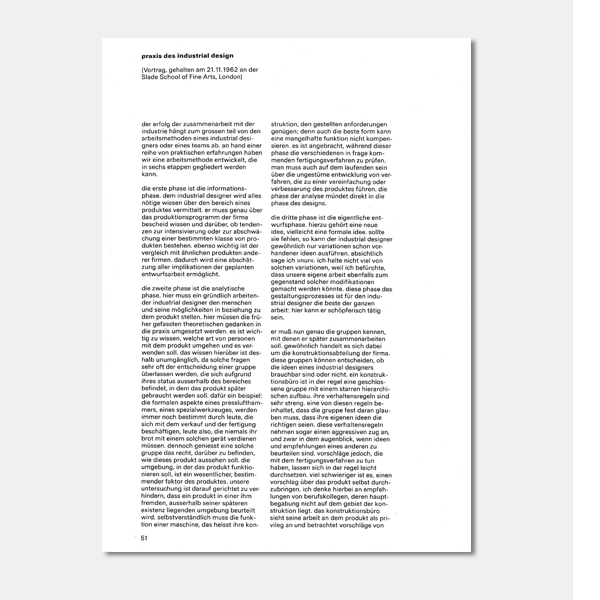 the success of working with the industry depends to a large extent on the working methods of an industrial designer or team. based on a number of practical experiences, we have developed a working method that can be divided into six stages.

the first phase is the information phase.

the industrial designer receives all the necessary details about the environment of a product. he needs to familiarize thoroughly with the company's production program and whether there are tendencies to intensify or reduce a certain class of products. equally important is a comparison with similar products from other companies. this enables an assessment of all the implications of the new design.

the second phase is the analytical phase.

at this stage, a thorough industrial designer has to put the human being and his possibilities in relation to the product. the theoretical ideas developed earlier have to be put into practice. it is important to know what kind of human being will handle and use the product. this is essential because such questions are very often left to the decision of a group which, due to its status, is outside the environment in which the product will later be used. an example:

the formal aspects of a jackhammer, a special tool, are still determined by people who are involved in sales and production; people actually, who never have to earn a living with such a tool. nevertheless, such a group enjoys the right to decide how this product should look like. the environment in which the product is intended to function is an essential, determining factor of the product. our investigation is aimed at preventing a product from being judged in an environment that is alien to it and outside its later existence. of course the function of a machine, i.e. its engineering design, must meet the defined requirements, because even the best form cannot compensate for inadequate function. during this phase, it is advisable to assess the various relevant manufacturing processes. it is also important to keep up with the impetuous development of processes that lead to simplification or product improvement. the analysis phase merges directly into the design phase.

the third phase is the actual design phase.

It implies a new idea, maybe a formal idea. if it is missing, the industrial designer can usually only develop variations of already existing ideas. i use "only" here intentionally. i don't think much of such variations because i fear that our own work could also become the subject of such modifications. for the industrial designer, this phase of the design process is the best of the whole job: this is where he can be creative.

he now needs to know exactly the groups he will be working with later on. usually this is the company's engineering department. these groups can decide whether the ideas of an industrial designer are useful or not. an engineering office is usually a closed group with a rigid hierarchical structure. its rules of conduct are very strict. one of these rules implies that the group must firmly believe that its own ideas are the right ones. these rules of conduct even take on an aggressive tone at the very same moment when someone else's ideas and recommendations should be judged. however, suggestions related to the manufacturing process are usually easy to implement. it is much more difficult to implement suggestions about the product itself. i am thinking of recommendations from colleagues whose main talent is not in the field of engineering design. the engineering office sees its work on the product as a privilege and regards suggestions from others as undesirable intruders. the ideas of an industrial designer also meet with a similar attitude. if you want, you can always build a barrier. the controversies do not arise in connection with questions of status; rather, they reach their climax during product planning. at least that's usually the case. only with an open-minded management that is able to enforce its ideas by means of a moderate dictatorship, useful results can be achieved. an industrial designer who is not familiar with these conditions will hardly have more than a formal effect. his ideas regarding the engineering design will be pushed aside for one reason or another. but all these obstacles can be overcome. sooner or later, the parties involved in the development process will come to an agreement.

the fourth phase is the decision phase.

the agreed solution has to be presented to the management of the company. the management in turn has to consider the commercial possibilities of the product. a positive decision can be expected from a sales manager if he is entrepreneurial, if he has a good understanding of the product and if he is prepared to take a certain risk. the decisions of the production department are much more far-reaching, since the new product has to be manufactured with the existing production methods and machinery. of course, any production method may be used when making financial sacrifices, but that would be commercial nonsense. the industrial designer has to consider carefully the production capabilities of the company. then he can be relatively sure that his design will be realized without drastic changes. information and requirements that seemed to have only a secondary character gain their true value in this phase. great difficulties can arise from a wrong assessment of information, whether this is done consciously or unconsciously. this is all the more true in cases where certain legal requirements influence the realization or function of a product.

the fifth phase is the calculation phase and the phase of adapting the product to the requirements of the facility and to manufacturing standards.

the industrial designer tries to use the general standard as a point of reference for his efforts. sometimes, however, the standard itself has improved over the years; it is then not easy to recommend something new. of course, a predominance of calculation and production offices may jeopardize the formal aspects of a design. since they cannot foresee the formal consequences of even minor changes, these groups can severely impair the desired character of a design. the industrial designer cannot simply accept this. with a strictly organized product, a small disturbance or a reduction in quality can have a big effect. this can only be avoided with good persuasive skills. another important decision arises in connection with the material. the company's suggestion is generally decisive here. their wealth of experience with suitable material should not be put aside lightly, as the use of a new material can otherwise easily be compromised by a lack of experience.

the sixth phase of design work is the model building.

a functional model provides useful information regarding the question of where critical limit load values have appeared. furthermore, the model provides important criteria for production planning.