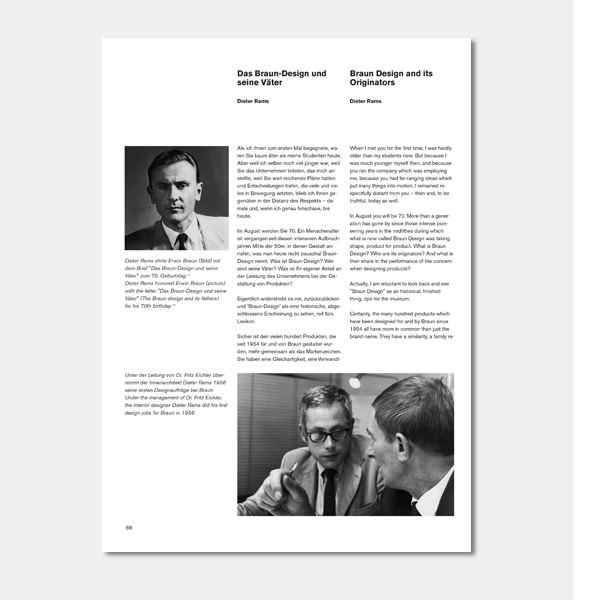 Braun Design and its Originators. Letter to Erwin Braun on his 70th birthday


When I met you for the first time, I was hardly older than my students now. But because I was much younger myself then, and because you ran the company which was employing me, because you had far-ranging ideas which put many things into motion, I remained respectfully distant from you – then and, to be truthful, today as well.
In August you will be 70. More than a generation has gone by since those intense pioneering years in the midfifties during which what is now called Braun Design was taking shape, product for product. What is Braun Design? Who are its originators? And what is their share in the performance of the concern when designing products?
Actually, I am reluctant to look back and see "Braun Design" as an historical, finished thing, ripe for the museum.

Certainly, the many hundred products which have been designed for and by Braun since 1954 all have more in common than just the brand-name. They have a similarity, a family relationship which make it possible to speak of "Braun Design" – and not only of the design of a single hifi set, shaver, camera, kitchen machine or hairdryer.

However, particularly when speaking of Braun, it is not true to speak in terms of one simple pattern, a design set in its early years and more or less mechanically applied to all the following products. A type of design which could be described as a technical patent and which only had a few creators. No, "Braun Design" is not a solution for me, but a basic concept, seeing design as a responsibility, a responsibility to search for a good solution for each new product. And to see "good" as good for the user of the product and not primarily for the bank accounts of the manufacturers.

I see the real entrepreneurial and design performance in having arrived at this basic concept, having realised the concept over and over again in concrete designs and in having persisted over a period of so many years. This has been a process. And many people took part in this process, at different times, in different roles, with different effects. In the history of human culture, nothing was ever created from nothing. Everything new had its predecessors and forefathers, needed encouraging conditions in order to emerge and to grow.

Years ago, you pointed out that your father had already made important suggestions and ensured the right conditions. Wilhelm Wagenfeld also definitely played a crucial part. You have often spoken about the lecture Wagenfeld gave in Darmstadt in 1954, which you heard and which proved to be your guide in the years to come.

You have also often stressed how important the work of the people from Ulm was – Otl Aicher's work acting as thought-provoking, and that of Hans Gugelot as architect and designer who designed the first Braun products from the new, functional and user-oriented point of view.

Fritz Eichler played a quite different role and had a quite different influence on the development of the Braun Design – he was, in his own words, the "midwife", the interlocutor who stimulates other, supports and strengthens them. The approximately ten designers, who worked on Braun appliances with and after Wilhelm Wagenfeld and Hans Gugelot – from Herbert Hirche to the young people who have joined the Braun design department in 1990 and 1991 – all of them share in the total performance in a personal and concrete way.

An attentive reader will have noticed that one name is missing in all of this – yours! It is a fact that your role is normally only given a short mention when looking back on the origin and development of Braun Design. This corresponds well with your own tendency to play down your achievements. When I say that I consider you to have played a decisive part, this is not to be seen as a birthday accolade, but as the attempt to put things in the correct light. You played the key role in as much as none of the others would singly have been effective in the same manner, not to mention all together, if it had not been for you.

What Wagenfeld said could be heard by many business people. With several of them, he even cooperated intensively over long periods. But where is the meaningful, long-lived, alive design performance of these companies today? The effect Wagenfeld had in 1954 was on the young entrepreneur, who was in the audience, able to assimilate and put the suggestions into actions.

The same goes for all the other people making suggestions, thinking together, creating, who have worked for and within Braun – including myself, of course. You had the vision of different products, of a different quality, of a different design, of a different company. You searched high and low for people who could realise your ideas for you. You gave them your ideas, you motivated them, gave them space to work continuously and in detail on the concepts. You created the conditions in which the construction and design innovations could be realised – and you did it with zest. You took the risk and you waited a long time before entering the market with products which differed from all the others and moreover, which had been designed as the result of a clearly different attitude. You remained steadfast and determined. Antonio Citterio wrote to Rolf Fehlbaum of Vitra, "As a designer, I am convinced of the basic importance of the client, both of his function and his person. All architecture and every product has a mother and a father: the architect or designer and the client."

Why has the design in other companies remained so lamentable? In the meantime, it has become obvious that good design also means economic success. Vitra and Erco are good examples. So many companies had, and still have the chance to perform better in this field. There are so many good intentions, enterprising beginnings – and there are so many timid endings, inconsistencies, mediocrities and confusions. Any designer who knows the reality of product creating knows, too, which factor is decisive, in 1991 as it was in 1954: the company management, their insight, their attitude, their capabilities, their deeds. The external aim should be to attain the internal aims by these means.

Giving a few vague explanations of their plans from the safe distance of the manager's office such as, 'We aim for an excellent design in all our products' has unfortunately been all that company executives do for design. This is about as effective as the beat of a butterfly's wing. Your example shows what is necessary in an entrepreneurial sense. Your involvement was always of a different type. If any of those concerned can claim to be the father of Braun Design, you certainly have most reason to make that claim.

However, as always happens, the children grow up, they respect their fathers, but then leave them. They must and they will become independent and add their own touch.