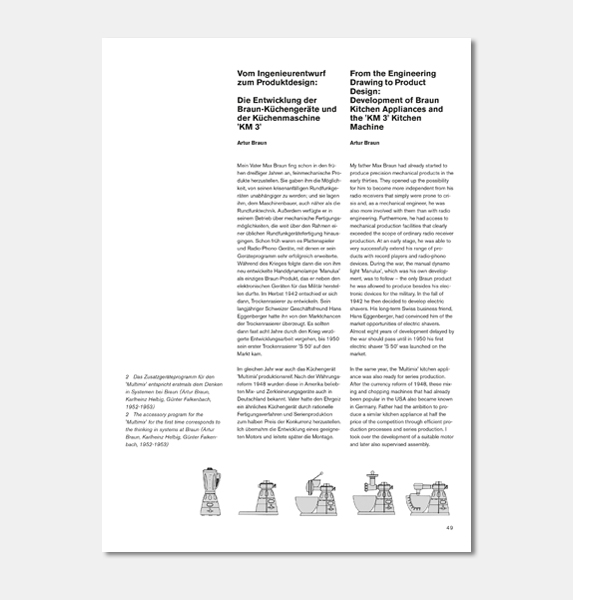 From the Engineering Drawing to Product Design: Development of Braun Kitchen Appliances and the 'KM 3' Kitchen Machine


My father Max Braun had already started to produce precision mechanical products in the early thirties. They opened up the possibility for him to become more independent from his radio receivers that simply were prone to crisis and, as a mechanical engineer, he was also more involved with them than with radio engineering. Furthermore, he had access to mechanical production facilities that clearly exceeded the scope of ordinary radio receiver production. At an early stage, he was able to very successfully extend his range of products with record players and radio-phono devices. During the war, the manual dynamo light 'Manulux', which was his own development, was to follow – the only Braun product he was allowed to produce besides his electronic devices for the military. In the fall of 1942 he then decided to develop electric shavers. His long-term Swiss business friend, Hans Eggenberger, had convinced him of the market opportunities of electric shavers. Almost eight years of development delayed by the war should pass until in 1950 his first electric shaver 'S 50' was launched on the market.

In the same year, the 'Multimix' kitchen appliance was also ready for series production. After the currency reform of 1948, these mixing and chopping machines that had already been popular in the USA also became known in Germany. Father had the ambition to produce a similar kitchen appliance at half the price of the competition through efficient production processes and series production. I took over the development of a suitable motor and later also supervised assembly.

Instead of expensive ball bearings we used sintered metal friction bearings for the 'Multimix'. For the enclosure and other molded parts we chose aluminum die cast which requires less post processing. This way, we were able to significantly reduce the costs for production and – with a retail price of 129.- DM – came close to the target defined by my father. Assembly started in late summer of 1950 and at the Frankfurter Herbstmesse the first series 'Multimix' devices were ready for demonstration (fig. 1). They met with lively interest and sold well.

At that time, fruit juicers from Switzerland entered the market, because the preparation of fresh fruit and vegetable juices in the own kitchen was becoming more and more popular. This caused my father to construct a fruit juicer as a 'Multimix' accessory. After a very short development time, we were able to launch it on the market in the fall of 1951. We called it 'Multipress'. This was the first step at Braun to expand the mixer into a versatile kitchen machine. Before he died in November 1951, father had thought about further accessories, in particular a stirring and kneading unit. In 1952, I picked up his ideas and together with Günter Falkenbach and Karlheinz Halbig developed a program of additional devices for the 'Multimix', which we were able to launch on the market in 1953 (fig. 2).

But soon the 'Multimix' was no longer state of the art. Its painted metal enclosure featured no double insulation and due to numerous production steps its manufacturing was complicated. The balancing of the fast running motor also had to be improved. For the new model, we used plastic and this was the birth of the very successful, patented construction of two pressed plastic parts that accommodated motor bearing and conus for the mixing cup (fig. 3 and 4). Armature and ventilator did no longer need to be separated for assembly. This significantly facilitated the balancing process and, in addition, the device featured a higher electrical safety. As a matter of course, the new model also fitted the existing accessories.

Extensions to a mixer – even if they work well – can merely be a makeshift solution. Our product range needed a compact kitchen machine and in 1956 we started its development. My basic idea to drive the bowl from the rim so that the stirring unit could work in a planetary movement was patented inside and outside Germany.

For the development of the kitchen machine, first a prototype with a separately driven bowl served for determining appropriate revolution speeds (fig. 6). After extensive stirring and kneading tests, we were able to determine a rotational speed difference and drive the bowl from the rim without any problems (fig. 7). These prototypes don't look very nice, but this does not matter; they have to work and they are a necessary prerequisite for the construction work to follow.

I had kept on updating Fritz Eichler about our development work so that the design department under his management could start with the design for our kitchen machine. Gerd A. Müller, who was an experienced model maker, first manufactured different base plates from wood (fig. 8). Then he produced several bowl models and finally models for different mixing arms (fig. 9 and 10). He combined motor base and bowl on a base plate and then completed them with a mixing arm (fig. 11 and 12). A mixing arm with a handle to improve the handling was also produced (fig. 13). This was typical design work. From Gerd A. Müller, the preparation of the models required creativity and a high degree of craftsmanship in handling wood and plaster materials (fig. 5).

In the meantime, Günter Falkenbach had constructed a functional model (fig. 14). The gear mechanism in the mixing arm and the bowl drive had been finished. For a plastic bowl with internal toothing, tool design and construction under the management of Ernst Kunz provided a prototype at record speed. It was good to see how the bowl of the first prototype turned and how the entire machine worked flawlessly as intended.

Fritz Eichler discarded the little enclosed assembly of the prototype, that reminded him too much of the old mixer combination. He clearly advocated a compact, smooth shape that should better embrace the bowl. He was able to convince us and, thus, Gerd A. Müller manufactured a plaster model according to his instructions that already resembled the later shape of the 'KM 3' (fig. 15). Another plaster model of Gerd A. Müller corresponded to Fritz Eichler's ideas to a large extend (fig. 16). In Günter Falkenbach's construction office, the precision required for a series product was elaborated in close cooperation with us engineers and Gerd A. Müller (fig. 17). Technology and design had finally found each other!

The standard equipment of the 'KM 3' kitchen machine included a chipping unit, which – as the gear unit for the meat mincer or the berry press – was the result of a close cooperation of engineering and design. All accessories were easy to handle. They formed one harmonious unit with the basic machine.

The 'KM 3' was launched on the market in April 1957. Its design was groundbreaking for Braun's electrical appliances that were to follow. The 'KM 3' received many international awards, became the market leader and achieved a high level of awareness and popularity. From 1961-62, Bodo Fütterer reengineered and improved it (fig. 18). Thanks to its timeless design and high technical quality, in more than 30 years a total of more than 2,300,000 units was produced until 1991.The 'KM 3' had a functional design, was easy to handle and with its smooth surfaces also easy to clean. It was robust, production was cost-efficient and it had the unmistakable Braun design. Max Braun would have liked it.

Source:
Braun, A.: From the Engineering Drawing to Product Design: Development of Braun Kitchen Appliances and the 'KM 3' Kitchen Machine. In: Jatzke-Wigand, H.; Klatt, J.: The Development of the Braun Design. In: Design+Design zero, Hamburg December 2011, 1. Auflage, 48-55